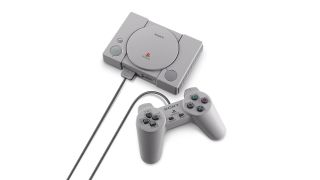 The PlayStation Classic is available now, but between a divisive game line-up, the baffling inclusion of slow PAL games and lack of video options, it certainly has its share of problems. If you were excited to revisit those old favourites but have been put off by the negative reviews, what are you to do? Well, since you're already looking to the past, it's well worth taking the time to consider the PlayStation compatibility on older Sony consoles to find yourself one of the best PlayStation Classic alternatives. We've put together a guide to the pros and cons of the best:

None of the old options are cheaper than the PlayStation Classic (which retails for $99.99 / £89.99), but Sony's past machines typically more flexibility over how your games look and feel, and if you avoid European hardware you won't get any slow 50Hz versions of games either. Better yet, you'll be able to pick your own games – though the extent of that ability depends on which option you pick. Here are the best PlayStation Classic alternatives:

Pros:
- HDMI output
- Sharp scaling in the right circumstances
- The only way to mix digital and physical games

If versatility is what you desire, the PS3 is your best bet for playing original PlayStation games. There's every chance that you've still got one kicking around, but if you don't, used consoles can now be picked up for under £40 if you shop around. Every PS3 model is compatible with digital games from any region, so long as you have the appropriate account and a way to fund it, and will also play physical games from your own region. This makes it the only method that allows you to choose between low digital prices and the full physical game library, allowing you the best balance of price and availability. Unfortunately those disc games will be 50Hz if you're in a PAL region, and unlike the PlayStation Classic, the PS3 doesn't trim their thick borders. As a bonus, it plays PS3 games if you ever get bored of wobbly polygons and blocky textures.

Like the PlayStation Classic, the PS3 connects to your TV via HDMI. The system scales PlayStation games well up to 1080p, with an optional image smoothing mode that applies major blurring to everything. As as system from the dawn of the HD era, the PS3 also connects to old CRT TVs if you want a more authentic experience. Just like on the PlayStation Classic, you can use virtual memory cards to save your games, so you're unlikely to run out of space. If you still have your old memory cards kicking around, it's possible to use a memory card reader to transfer your old saves onto the PS3 too. Some old controllers can also be used with an adapter too, but you'll want to check compatibility before trying that.

The PS3 does have some downsides. The system runs at a minimum of 480i, which means 240p games are subject to unnecessary interlacing. The PS3 will also always output via the correct TV standard for the game it's playing, so digital import games might well run in black and white. Digital games are prone to narrow aspect ratio and heavy smoothing – you can partially correct this by turning smoothing off, but things won't quite be razor-sharp the way they can be with disc games. It's always at least as good as the PlayStation Classic at a minimum. Additionally, it's worth noting that you get a little additional input lag when playing PlayStation games on PS3, so if you're very sensitive to that and play a lot of fast-paced games, you might want to consider other options – but realistically, you'd almost certainly have the same problem hooking a PlayStation or PS2 up to your TV without an expensive upscaler.

Digital PS3 games are all affected by forced smoothing – we've turned it off here but it still applies. As you can see, it's at least as good as what you'll get from PlayStation Classic.

We're running Jumping Flash from a PAL disc here – this shows off the sharpness PS3 can achieve, but does highlight the smart move to crop borders on PlayStation Classic.

We'd imagine the PS2 is probably older than some of our readers by now, but the world's best-selling console is still a good way to play original PlayStation games. All models of PS2 include PlayStation backwards compatibility, but only with disc games – and only in the region you're from. For those of you in PAL regions, this means you won't get Persona and you will get slow, bordered games. Many games are cheaper via digital download than they are on disc, too. The good news is that the PS2 has an enhancement option that can provide a nicer look for your old games, as texture smoothing is available. Unlike the image smoothing on PlayStation Classic and PS3, this produces filtered textures but leaves other elements like sprites and polygons alone. It can cause some glitches, but it's certainly nicer than the PS3's option when it works. One of the nice things about the PS2 is that if you had a preferred controller back in the day, you can track it down and it'll work as expected.

Unfortunately, you're forced to use physical memory cards again, which adds to the cost and feels considerably less convenient than it did in the 90s. The other major disadvantage of the PS2 is its video output, as it doesn't support HDMI and only outputs standard definition images. In order to get HDMI output and image quality comparable to that of the PS3, you'll need to use an upscaler like the XRGB Mini or the Open Source Scan Converter (the latter of which we've used to capture 720p screenshots here). These devices are capable of fantastic results, but they're very expensive so you'll only want to consider them if you're regularly going to connect old consoles to your TV. Without such devices, you're tied to legacy inputs like component and RGB SCART, and you're at the mercy of your TV's scaling engine.

When upscaled to 720p with an external device, video quality on the PS2 can exceed that of the PlayStation Classic – but be warned, this is an expensive option.

The PS2's unique texture smoothing option can give a great look for some games – the forklift here looks considerably better when it's turned on.

Pros:
- It's portable
- Play on your TV via PlayStation TV
- Virtual memory cards

We've still got a soft spot for Sony's handheld, but the Vita is generally the least appealing option for playing PlayStation games. However, certain audiences will prize its unique capabilities. The Vita is only compatible with downloadable PlayStation games, which limits your options considerably. Quite a few of the PlayStation Classic games aren't available, and there hasn't been a new PSOne Classics release in over two and a half years, so they're never likely to arrive. The games you'll miss out on if you choose Vita are Battle Arena Toshinden, Grand Theft Auto, Intelligent Qube, Mr Driller, Revelations: Persona, Super Puzzle Fighter II Turbo and Tekken 3. Players in Europe can add Ridge Racer Type 4 to that list – and annoyingly it's also more of a hassle to region-hop on Vita than on PS3 to correct that.

Images are soft thanks to some blurring (though again, never worse than on PlayStation Classic), the display is slightly zoomed in, and you don't get any display options of note. You do get virtual memory cards, but obviously using any old peripherals is completely out of the question. It might sound like we're down on the Vita, but it's a perfectly good way to play PlayStation games and matches or beats the PlayStation Classic in most ways – it just doesn't offer as much as Sony's other systems.

Of course, the big advantage of the Vita is that it's portable, so those games you do buy can be taken anywhere. For some people that's a huge deal on its own, and you'll know if you're one of them. It's also possible to use the PlayStation TV – image quality here is roughly equivalent to that of digital games on PS3 with smoothing on. The PlayStation TV is even smaller than the PlayStation Classic, too. The other people that will want to consider the Vita are people that really want to play Persona. The original disc version is ridiculously expensive and it's not available as a PSOne Classic. There was an enhanced PSP remake in 2009 though, which is more faithful to the Japanese original than the original Revelations: Persona release was. This can be downloaded for Vita, and is considerably cheaper.

If you choose to go down the PlayStation TV route, image sharpness is no worse than you'll get on PlayStation Classic – and you can carry on your game on the portable Vita.

The PS3 is the best option for most players, particularly those that don't have to worry about PAL games – it connects to your modern TV, has the best game availability and doesn't require you to mess around with memory cards. If you're willing to splash out some serious cash, the PS2 can offer great options for purists, and the Vita will hit with people who want to play on the move (or just play Persona).

Want something a bit less PlayStation themed? Check out our pick of the best retro consoles you can buy right now.