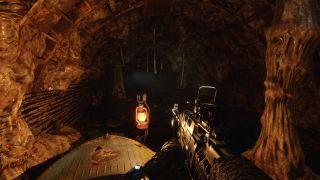 While everyone has opinions, when it comes to the best Metro Exodus weapons, there are clear winners. Whether you prefer stealth, or a more guns blazing approach, there are perfect guns for every occasion which can be customised and upgraded to improve their abilities. You can change out out barrels, stocks, magazines, sights, and more to perfect your loadout.

What weapons you take with you is an important consideration as well. You can only actively carry three different guns at a time so you'll need to think carefully about what you're going to want to you, or need, in any given situation. For example, the pneumatic Tikhar rifle should always be in your collection. The series iconic weapon has easy to craft ammo, so you'll never run out. And, upgraded and overcharged, it's a one hit kill when used well. As for what you pick out of the 10 guns in total is entirely up to you in Metro Exodus but if you want our advice, read on.

While technically a pistol, the Ashot fires shotgun shells and certainly kicks like a shotgun. It'll be a single-shot weapon when you find it, but once you get a double barrel for it, it really comes to life. You can reload and fire both barrels quickly, and for that reason I recommend the double over the single, suppressed barrel. You generally only need one suppressed weapon for stealth purposes, and shotguns are mainly used when things are charging at your face, so it's worth having the extra round in the chamber. That said, I wouldn't recommend the quad-barrel. While it is very cool, it fires two shells with every pull of the trigger, so it tears through your very limited ammo. One shell is usually enough to kill, so there's no reason to pump two into everything.

You won't get access to the Shambler until a little later in the game, but once you do, there's absolutely no reason to look back. It's better than the Ashot in almost every conceivable way. The Ashot technically deals more damage per shot, but with larger magazines, better stability, and a freaking suppressor - yep, on a shotgun with a 10-round mag - the Shambler is much more well-rounded. It'll chew through anything at close range, and unlike some weapons, it has sharp iron sights and feels great with a laser attached.

The Revolver is one of the best candidates for a suppressor, as its higher-level barrels don't add that much damage and accuracy over its suppressor. It's also pretty accurate by default, so the 4x scope available for it is a great fit. You'll find a six-round chamber for it pretty early on, and you'll also get an eight round chamber and rate-of-fire upgrade a bit later, which is when the Revolver really starts to come into its own. For how much damage it does, you can also carry a lot of rounds for it. I can tell you from experience that it goes great with a double-barrel Ashot.

You'll find this beauty of a sniper in the Caspian Sea, and if you're anything like me, you'll have a hard time putting it down. Snipers have always been incredibly powerful in open-world shooters simply because they enable you to clean out enemy camps from disgustingly far away, and that same tactic works wonders in Exodus. The Valve is more accurate than the Revolver, deals more damage per shot, and supports more powerful scopes like the beloved 6x. Its native bolt-action reload makes it a little awkward to pick up, but you'll quickly unlock an expanded five-round magazine which really lets this sniper sing. I paired it with the Shambler in my playthrough, and I felt untouchable in most engagements.

The Kalash is essentially the gun of Metro. It's ol' reliable, and for good reason. It's not the most accurate rifle - and by the time you get some proper barrels for it you'll have access to the Valve - so it shouldn't really be used for sniping, but it's a flexible and effective mid-range weapon. With a suppressor and a reflex sight, it's perfect for cleaning up groups of mutants without drawing the attention of everything around. The Kalash also has the added advantage of being extremely popular with bandits. You'll scavenge parts and ammo for it in most firefights, making it a great choice for many missions.

The Bastard submachine gun is in the unfortunate position of being compared to the Kalash as a mid-range weapon and the Revolver as a suppressed tool for stealth, and both comparisons are unfavorable. I mean, you don't bring a bullet hose to a stealth mission, and a suppressor really limits the Bastard's damage. The Kalash is more powerful and reliable, the Revolver has better accuracy and ammo efficiency, and as if that weren't enough, the Bastard is also prone to jamming (hence the name). For those reasons, I never really touched it in my playthrough. It does sound cool, though.

The Gatling is a gatling gun. It shoots lots of bullets very quickly. The thing is, that's all it does, and you can't mod it at all. So while it is fun to pick one up off a downed armored guard and channel your inner Schwarzenegger, it's not the most practical weapon.

The relationship between the Bulldog and the Kalash is similar to that of the Shambler and the Ashot: the former is unquestionably better, but you don't get it until a little later in the game. The Bulldog has the same flexible sights and high-capacity magazines that make the Kalash deadly at medium range, but it's more accurate and deals more damage per shot. It's also much more powerful when fired in controlled bursts.

Ammo is scarce in Metro Exodus, and even though it's cool, laying on the trigger and dumping rounds into your targets and everything around them is just inefficient. (This is largely why ammo-hungry guns like the Bastard SMG and the Gatling Gun don't rate highly.) This is where the Bulldog's slower rate of fire shines. By pacing your shots and treating the Bulldog like a semi-automatic rifle, you'll get more mileage out of your limited ammo reserves. You can even put a suppressor on it if you're worried about noise; otherwise, its accuracy-boosting long barrel will do just fine. That said, the Bulldog can still be used as a bullet hose if a mutant gets up in your grill.

For most of the game, the Tikhar rifle is your best friend. It's relatively quiet by default, it's accurate enough to properly support a 4x scope, you can craft ammo for it on the go, and it'll take down common mutants and most bandits as long as you land your headshots. It just needs a little extra upkeep in the form of an occasional pump-up. With that in mind, I used the airtight pump for most of my playthrough. This ensures that you never lose pressure until you fire a shot, allowing you to overcharge the Tikhar's pressure and preserve it. The automatic pump, which keeps the pressure in the green when you have it stowed, is a little easier to use, but I preferred the persistent overcharged rounds of the airtight variant. I also found the 27-round mag superior to the 36-round mag. I never needed the extra nine BBs, but I did notice the stability decrease that comes with the 36-round mag.

I have a lot of love for the pneumatic Tikhar rifle, but the Helsing crossbow found in the Taiga stole my heart. First of all, it's a crossbow - a tremendous bonus in its own right. As a crossbow, it's silent, accurate, and efficient, even more so than the Tikhar. You can craft new bolts for it on the go, just like the Tikhar's BBs, and you can even retrieve those bolts from defeated enemies like you would throwing knives. This makes it perfect for killing small, annoying targets. Oh, and did I mention the exploding bolts? Granted, you can't retrieve these special bolts from targets, but that's only because these things will powderize anything they hit. I think that's a fair trade.

You might think that the Tikhar, with its large magazines and higher rate of fire, would be better at medium range, but you'd be all wrong and a bag of chips. The Helsing has an optional pneumatic attachment of its own which increases its rate of fire dramatically. Paired with an eight-bolt drum magazine, this turns it into a freaking Needler. It is the little crossbow that could, and it only does everything.