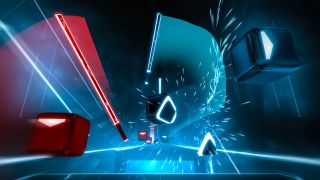 Facebook has acquired the studio behind VR rhythm game Beat Saber in their efforts to "create new ways for people to experience music and VR gaming." Oculus, which is also owned by Facebook, revealed the news in a blog alongside a Q&A section with more detailed information.

Facebook seems to understand well the concern from the community that an indie studio bought by a massive corporation might lose its identity. In a reply to a question about precisely that, Facebook assures fans that the studio and its new parent company are of similar minds when it comes to "[pushing] VR to new heights."

With regards to modding, Facebook says they have no issue with it as long as it's legal and doesn't break any Facebook policies. The social media giant implores modders to keep up to date with their policies on the matter to make sure they're staying within the guidelines. "[Modding] is not intended for engaging in piracy or illicit modding, including mods that infringe on third-party IP rights or contain malicious code."

Beat Saber joining Oculus is likely to be one of many developments in the VR space for Facebook, although it isn't clear whether that means the acquisition of more studios in the future. Whatever their long-term goals, here's hoping they can make meaningful strides in VR without sacrificing the souls of the small studios they're buying.

Looking to get into VR on the cheap? Keep up to date with our guide to the best Black Friday PlayStation VR deals.