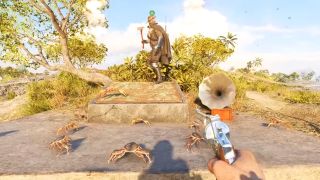 Battlefield 5 recently got its own version of the Wake Island map and it turned out to be a two-fold tribute to longtime fans: first, Wake Island is a beloved classic that has appeared in several other Battlefield games; and second, this version has a crab rave that happens after you celebrate the history of Battlefield music. The secret was discovered after Wake Island went live on December 12, though the Battlefield 5: War in the Pacific chapter first went live back in October.

YouTuber jackfrags captured the whole process, which is only moderately complex as far as ridiculous Battlefield Easter eggs go. There's a plaque thanking longtime players for joining the fight at Wake Island once again near the D flag (it also lists the Battlefield games Wake has appeared in, which is a lot of them). You need to go around the map and find crabs that click at you and burrow into the ground when you approach them, rather than skittering away. These crabs will reappear by the plaque.

Head back to the plaque after you've found five crabs and you'll see them standing in a circle around a set of headphones. Pick up the headphones, head to the nearby bunker at D, and stand near the communications terminal inside. You should hear Morse code, which when translated, will give you coordinates. These are real-life coordinates, for real-life Wake Island! The game version is pretty close, geographically speaking, so you can punch them into Google maps for a clue on where you need to go next.

Head to that part of the map and look around for a vinyl record (it may be underwater). Take the record back to the plaque - which also sprouted a gramophone along with the headphones - and it will play the Battlefield 1942 theme. Still the best. Then you'll need to go get more coordinates, another record, and repeat the process until you find the area around the plaque is covered with crabs. Play the final record and the ultimate crustacean dance party will begin, featuring pyrotechnics and lots of adorable pincer waving.

Electronic Arts has confirmed that the next Battlefield game won't arrive until April 2021 at the earliest, so that leaves plenty of time for an escalating series of weird secrets to follow this one.

See what else we loved in the last 10 years with our look back at the 100 best games of the decade.