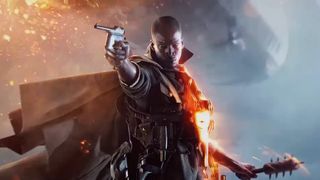 Microsoft is serving up Xbox One S bundles three ways for the upcoming release of Battlefield 1. The company revealed a trio of special packages featuring the slimmer, 4K-compatible console and the online shooter on its official site, and they all even come in different colors.

If "Olive Drab" sounds anything but drab to you, consider the Xbox One S Battlefield 1 Special Edition Bundle. This first bundle will arrive on October 13 in Europe (exclusive to GAME in the UK) and October 18 in the US. It includes a military green 1 TB Xbox One S console with matching controller and stand, a copy of Battlefield 1 Early Enlister Deluxe Edition (downloadable unless you buy the bundle from GameStop, where it will be a boxed copy), and a month of EA Access, all for $349 / £299.99.

As for in-game goodies, the Deluxe Edition comes with the Hellfighter, Red Baron, and Lawrence of Arabia packs, five battlepacks, and unique exteriors for Behemoth vehicles like the zeppelin, armored train, and battleship.

On the less-spendy side you have the standard Xbox One S Battlefield 1 Bundle, coming on October 13 in Europe and October 21 in the US for $299 / £249.99. This version has the usual white 500 GB system, a downloadable copy of Battlefield 1 Standard Edition, and a month of EA Access.

The US will also get a "Storm Grey Special Edition" of this bundle with a dark grey console / controller and otherwise identical contents. The stormy system won't be out until November 1, and it will only be sold at Microsoft Stores and Wal-Mart.

Battlefield 1 itself will be released on October 21, though you can use that EA Access subscription to start playing on October 18 on Xbox One. Until then, enjoy some of the goofiest moments from the open beta.