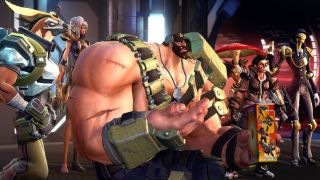 It looks like Battleborn really dropped the ball with its lack of checkpoints, something that's currently one of the more consistently requested features among players.

The lack of such a crucial feature really came to light during an in-office team chat that highlighted 40+ minute missions, with no saving, in a slightly glitchy game aren't fun. Who knew?

And it's not just Team Radar having a rough time of it. Twitter is full of people asking about checkpoints:

@Battleborn Please put Checkpoints in the Story Mode!!!21 May 2016

I feel #Battleborn is a great IP that needs a lil more refinement. No boss checkpoints r unforgivable especially when game is buggy as hell.17 May 2016

Battleborn has some really terrible story missions. There aren't any checkpoints and they are 20ish minutes long13 May 2016

@battleborn please put checkpoints for mission failure in the campaign, it's too harsh to make us start over with how long missions are12 May 2016

Straight up @Battleborn's story mission design is hot garbage. 30 minutes in and you can't heal this defense point, it does, no checkpoints.11 May 2016

If @Battleborn would add checkpoints to their missions I may be able to finish the game...9 May 2016

Gearbox doesn't seem to be responding to the issue currently, and is mainly dealing with people who can't access new character Alani. The latest patch notes are focusing on gameplay balancing, while on the forums the chatter mainly has a similar vibe - the missions are too long and the game too glitchy to not have checkpoints (although, in fairness, there are some preferring the challenge).

What do you guys think? Anyone playing Battleborn and wish it had better checkpointing?