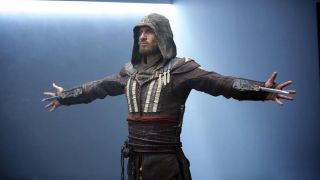 It’s not even out in cinemas yet but given the game franchise’s penchant for leaping through time, the Assassin’s Creed movie already has sequel chatter. And no one seems happier to talk about it than director Justin Kurzel. Will he and Michael Fassbender be teaming up once again?

"We were talking about it the other day," Kurzel reveals in an interview in the new issue of Total Film magazine. "If we could find a period that, again, doesn’t feel like it’s repeating the game. And then you’ve got to think about how Michael would fit within that period and time. You really can create a whole new palette for the next film. The war between the Templars and the Assassins can be flipped and changed, so it provides some pretty unique takes on where you could take the story."

Given that we’re being introduced to a new stack of modern day Assassins, the possibilities seem endless. We could follow any one of them into the past and while some of them are in game Assassins, there’s still plenty of historical time periods without sneaky stabbers. Add in the fact that Fassbender’s Callum Lynch will have multiple Assassin descendants and things get interesting. In the games we’ve had plenty of related Assassins. Templar Haytham Kenway, the father of Assassin’s Creed 3’s Connor (or Ratonhnhaketon) was the son of Black Flag’s Edward Kenway. One future Assassin has multiple genetic ancestors stretching through history so all Lynch has to do is tap into history again and see where his genes take him.

You can read the rest of the interview with Justin Kurzel along with stars Michael Fassbender, Marion Cotillard and Jeremy Irons in an exclusive Assassin’s Creed feature in the new issue of Total Film magazine. Pick up the new issue out on Friday or subscribe so you never miss an issue.