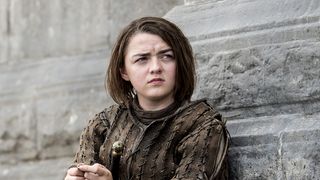 Being a producer on Game of Thrones season 7 must be one of the hardest jobs ever. You’ve got to make sure, at all times, nothing spoiler-y slips out before it’s too late (or theorists get a hold of it). Say, for an example, a magazine cover’s prop possibly hinting at Arya Stark’s direction for the upcoming season. Oops, that totally happened. Possible spoilers follow.

The eagle-eyed Thrones aficionados over on Reddit have found Arya’s sheathed dagger in the latest Entertainment Weekly magazine cover bears a striking resemblance to the Valyrian steel Catspaw dagger, which is possibly in the possession of Littlefinger.

The weapon has already changed hands a few times in the show, with it being recovered by Cait Stark after the attempted assassination on Bran, with Littlefinger declaring it to be Tyrion’s weapon (possibly while twirling his moustache and laughing maniacally). Varys is also shown holding it, but it’s believed to still be with Littlefinger, the little scamp

Which begs the question, how did Arya get hold of it? Common sense (which, admittedly, you can’t always apply to Thrones) would suggest that Arya swipes it off Littlefinger on the way to a reunion with her big sis Sansa.

More interestingly in terms of the endgame of the show, the dagger – small as it may be – can take down White Walkers. Could we see Arya take on the resurrected evil North of the Wall? Let’s bloody hope so!

(Or it could just be an honest mistake by the prop department. But speculating is much more fun.)