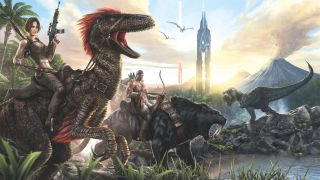 After being available in early access versions since 2015, Ark: Survival Evolved has finally been officially released on PC, PS4, and Xbox One. It's a cutthroat game that has a steep learning curve for new players. Therefore, it stands to reason you’ll need all the help you can get, if you want to progress.

Luckily, we’ve taken the time to put together a list of some of our best tips on surviving. Not only will it help you get a better handle on the game, but it’ll also provide you with some advice on how to stay safe on PVP servers. Enjoy!

1. Pick on the little guys

There are certain creatures in the game who won’t fight back, even if you attack them. Prioritise hunting down these to begin with, as they’ll give you lots of items for no risk at all.

Dodos are the obvious target. They’re the first creature you’re likely to come across and are a great source of hide and meat. Take advantage of this. When you get a few basic tools together, you can then move onto bigger prey like Parasaurs. These take longer to kill as they’ll try to run away and have more health, but they’ll give you a much greater yield, so it’s absolutely worth it.

2. Build away from the beach

Location is extremely important in Ark: Survival Evolved, especially in PVP. You’ll want to build away from the beach and, ideally, under the cover of some trees. This is so that other players will have a hard time finding your base, from all angles.

It’s also a good decision to try to pick a spot that’s near to drops and has easy access to resources like hide, stone and wood. This way you can quickly amass some good gear and you won’t have to stray too far away from home while you’re still at a low level.

3. Keep upgrading your base

One goal you should be constantly working towards is upgrading your base. Base defence is a vital aspect of Ark: Survival Evolved, particularly on online servers.

Whenever you can, make sure to learn any engrams that allow you to craft stronger walls or better defences. These creations can prevent offline raiding and help you hold on to your gear for just a little while longer.

There are other things you can do to secure your base. These include building multiple rooms to prevent enemies from gaining access to everything in one go, setting traps to kill or maim trespassers, or making choke points so you can fend off intruders and not get overwhelmed by multiple targets.

The goal is to make raiding as awkward as possible for other players. You’ll want them to waste as many resources trying to get into your base, so plan your layout accordingly. This might mean making the upper floors difficult to access by hiding the ladder or putting spikes around your base to stop them from attacking from multiple angles.

Something you’ll learn from spending a lot of time in Ark: Survival Evolved is that pin-locking storage boxes isn’t necessarily worth it. If an enemy doesn’t know your code, they’ll just break the box instead, meaning you’ll lose everything when the despawn timer runs out rather than just the few choice items that they want.

Leave your storage box open. I know it seems silly, but this way the intruders can take whatever they want and leave the items they either can’t carry or have no interest in. After all, it’s better to have something left over than have all your items disappear.

6. Joining a tribe makes everything easier

Joining a tribe is the simplest way to get ahead in the game. It reduces the time it takes to carry out tasks, gives you safety in numbers, and earns you extra XP whenever you’re near another tribe member who’s harvesting resources.

When you first load up the game, reach out to other players on global chat and see who’s recruiting. Better yet, start your own tribe and try to recruit whoever you come across.

Just make sure that the person you end up playing with has the same kind of goals. Otherwise, it can get pretty messy when you have to kick them for bad behaviour like hoarding equipment or excessive raiding.

7. So does taming animals

Taming animals is another way to speed up progression in the game. Different animals are better suited to specific goals. For instance, Trikes are skilled at harvesting thatch, wood, and berries, and offer a fantastic mode of transport, whereas Ankylosaurus are experts at mining and can carry a lot of gear.

To tame animals all you need is a means of knocking them out and some raw meat or mejoberries to feed them with. This will depend on whether they’re a carnivore or a herbivore.

The taming process can take quite a while, but it’s well worth the time. Just pick a safe spot and get to work. You’ll soon reap the benefits.

At the beginning of the game, you’ll want to level up quickly to get access to better engrams and improve your stats. The easiest way to do this is to find explorer notes. These are collectibles, hidden inside of chests and stashed near stone ruins.

Not only do these notes give you tons of XP, they’ll also temporarily increase the amount of experience you earn. Keep a lookout for them.

It’s super easy to die in Ark: Survival Evolved, so it’s always important to ensure you have a way of getting back to your body to retrieve your gear. Planting beds is the best way to do this. It allows you to fast travel across long distances, and respawn wherever you need to be.

The lowest cost bed that you can make is a hide sleeping bag, which can only be used once to respawn. Simple beds, on the other hand, can be used multiple times, but need to be placed on a foundation. Use a mixture to help you get around.

Just try to keep them hidden, as otherwise players may try to destroy them, leaving you stranded.

Every so often you’ll see little symbols appear in the bottom right of the screen. Rather than spamming chat with questions about what they mean, it’s a lot easier - and far less annoying for other players - to simply expand the HUD by holding H (PC), holding the touchpad (PS4), or holding the View button (XBO). This brings up additional text, describing your current status, as well as any afflictions you may have picked up on your travels.

It will also give you the current in-game time in the top left corner of the screen, which is useful for plotting how to spend your hours.

Do you have any more tips for surviving? Let us know in the comments below.