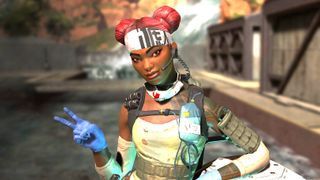 There was supposed to be a big Apex Legends update dropping today - not only did it not drop (for consoles), but there is no clear date on when the update will actually arrive. A tweet from the official Apex Legends Twitter account announced the delay due to a "last-minute, unforeseen issue" but gave us precious little information otherwise. Then, to add to the confusion, the account confirmed an hour later that the update had gone live on PC, but there was still no ETA for consoles.

Heads up, Legends. Due to a last minute, unforeseen issue, the patch that was originally set to go live today has been postponed to a later date.Once we have more information and an ETA on what that new date is, we'll be sure to update everyone here.December 3, 2019

Huddle up, Legends. The patch we originally communicated to be delayed ended up going live shortly after on PC only. We're still working on an ETA for console and will continue to update everyone here as information comes. We apologize for the confusion. pic.twitter.com/8M7kojW1y4December 3, 2019

As GamesRadar+ previously reported, the upcoming Apex Legends update was set to drastically change the progression system, bumping the level cap up from 100 to 500 and giving payers the chance to earn 199 free Apex Packs - that's 154 more than before. If you hit level 100 before the update dropped, you'd retroactively get the new rewards on your account. Respawn worked out the math as follows:

Under the new progression system, you'd earn a new level badge every 10 levels from 110-500 and a new gun charm every 100 levels, with 36 gun charms joining the Apex Packs and shop inventory. The new charms include cute versions of the Legends (Pathfinder is adorable), some Loot Ticks, and accessories.

What's confusion about this update delay is that it did ultimately go out on PC, but Respawn themselves aren't sure when it will drop for PS4 and Xbox One. Whether the delay was because of a last-minute adjustment or was due to a newly discovered bug, it's odd that the messaging is unclear from developers themselves. While the delay is annoying for console players, it would suck if there is indeed a bug buried in the update that would render the PC version unplayable.

We'll keep you updated on when the latest Apex Legends update will drop for consoles.

While you're waiting for the update, why not check out the story of Apex Legends' Beyoncé-style surprise launch.