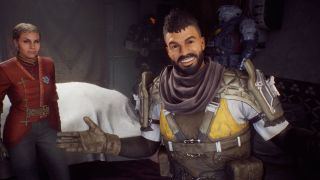 Last we heard about Anthem, select players were getting their hands on an early build of its first big in-game event, The Cataclysm, via a number of Public Test Servers on PC, and the first reactions haven't been great.

Nevertheless, one month later, and BioWare seems to finally be rolling out that update across the game at large, as those still playing on PC and console have begun to notice a number of surprise developments across Anthem's open world.

Strange sights, including space stations and black tentacles, have been appearing in the sky, though some aren't sure whether this is a sign of an incoming content drop, or just another crazy BioWare bug to be dealing with in a game that's already gained notoriety for its lack of polish.

Anthem tips: 13 things you need to know before you get started

Some players have even discovered in-game challenges explicitly alluding to The Cataclysm itself, but BioWare's Global Community Lead for Anthem - Andrew Johnson - has since confirmed these specific features were rolled out earlier than intended, and the latest patch has now walked back on those changes.

In any case, it looks like The Cataclysm is finally about to kick off in one of the most controversial games of 2019 so far, over two months on from its anticipated release date. Given that BioWare has removed any trace of Anthem's former road map from the internet, remaining players are currently in the dark over when to expect future updates to the game, but hopefully this one arrives sooner rather than later.

For more, check out all the big new games of 2019 still on the way, or watch our Release Radar below for a guide to everything else out this week.