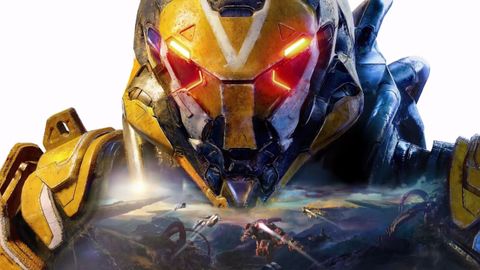 Anthem is ultimately severely flawed, and very unfinished. There's half a good game in there, but it doesn't do enough to diminish the overall feeling of emptiness and repetition.

I really wanted to love Anthem. Over the years, BioWare has created such memorable journeys for its players – scaley, sexy, spacey and otherwise – that the thought of such a single-player narrative playing out across a multiplayer structure akin to games like Destiny was seriously exciting. But Anthem actually, spectacularly, manages to fail at both aspects of that ideal. The single-player aspect of Anthem never evolves enough to resemble anything akin to a satisfying narrative experience, while the mission structure and multiplayer trappings are nowhere near finished enough for a game of this calibre. What you're left with is empty, utterly frustrating – it genuinely makes me sad.

It's a shame because, on the surface, there's a lot to love about Anthem. The core appeal lies in the game's mech suits, known as Javelins. There are four to choose from, each offering a different play style, from the tank-like Colossus, to the very sleek, fast and feminine Interceptor and the space wizard, Storm. Oh, and there's the basic all-rounder Ranger, but no-one willingly chooses that one. A lot of Anthem's fun comes from customising these Javelins, working out how to create the mech suit of your dreams from the colours, materials and attachments on offer. Seeing that chrome glint in the light will never get boring.

Watch our 60 second video review below:

Once you've settled on your neon, cyberpunk Javelin (what, just me?), that joy is amplified by discovering the way your Javelin moves through the world known as Bastion. The transition between walking and flying, with the rumble of jets pounding through your controller, the unique movement styles of each mech, it's all incredibly good fun.

It's an utterly beautiful place to explore too, with an aesthetic that hints at the lore buried beneath it: That this is a world made by some otherworldly creatures; an unfinished world that's almost been pieced together by taking the prettiest elements of Earth and smashing them into one locale. Anthem is one of the most beautiful games I have ever played, filled with moments where you just want to stand atop a waterfall and marvel at what BioWare has created here. But part of that comes from the idea that sometimes there's little else to do within Bastion that'll appeal in the long term.

It's almost incredible how quickly the appeal of Anthem's world wears off. Its beauty is only skin deep, and that really is Anthem's biggest problem.

A story only skin deep

But there are plenty more problems with Anthem's multiplayer than just the Launch Bay. Rubber-banding is a huge issue for this multiplayer title. I've lost count of the number of times I've dropped into a mission, only to be told I'm outside the mission area and be warped to the rest of my squad. You regularly miss out on vital mission information because of it, which doesn't help its major problems with scene setting, and forces you to watch loading screen after loading screen just to get into the action (which has sometimes even finished by the time you've caught up). Even after the Day One Patch, the loading screens are incessant, and plentiful, with them cropping up whenever you move from one area to another. Heck you have to watch two just to get in and out of your loadout menu, which is frustratingly only available from the Forge within Fort Tarsis.

Which mech should you pick first?

Which is the best Anthem Javelin?

It's also strange that for a game focused on four-player co-op, you never really have to interact with your fellow Javelin pilots beyond staying together as a group, and occasionally pulling off combos against the more tricky foes. The mission structure is such that you never feel like you're working as a team, as they usually consist of fighting off waves of enemies while waiting inside a magic circle, or collecting fragments of something to stop another thing exploding. The later story may distract you from the repetition at some points, but there's never any true variation.

An endgame to really end the game

The endgame only serves to highlight that too. As I reached it some 30 hours in, I'm faced with another set of checklists to complete, which effectively involves grinding through 25 quickplay missions. Without the narrative wrapping, Anthem's core repetition is exposed; With nothing more than betterint the numbers on your gun and abilities to propel you deeper into the endgame, I'm struggling to find a reason to keep on playing. Of course, it doesn't help that the game is still riddled with bugs, server errors and other quirks that sometimes makes the simple act of getting into a mission a real struggle.

Great Javelins, awesome powers, and a stunning landscape can get you so far, but with no real content to fill the world with, Anthem becomes a game that's devoid of soul. Obviously, it's intended as a game that will evolve over time, and as Destiny has proved, it's possible to turn it all around in the months (and possibly years) to come. We will be coming back to Anthem with an updated review after the first few additions in the roadmap have been implemented, but BioWare's latest has a very long way to go before it can be classed as one of the greats of this console generation, let alone a game worth playing.

Anthem is ultimately severely flawed, and very unfinished. There's half a good game in there, but it doesn't do enough to diminish the overall feeling of emptiness and repetition.