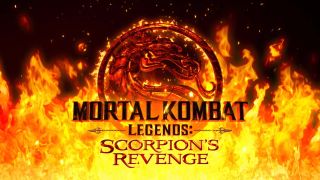 Mortal Kombat Legends: Scorpion’s Revenge, a new animated film based on the fighting series, is expected to release by June 2020.

As reported by Revenge of the Fans (via The Hollywood Reporter), the animated movie is in production at Warner Bros. Animation, and there's already top-tier talent attached to the production, including Community’s Joel McHale who will portray Johnny Cage and Dexter's Jennifer Carpenter is on board to offer her voice as Sonya Blade.

The animated movie features a script by Supernatural's Jeremy Adams and is directed by Batman: Assault on Arkham's Ethan Spaulding. Netherrealm Studios’ own Ed Boon is also thought to be on-board as a creative consultant while Rick Morales steps in as producer and Jim Krieg as co-producer, whose credits include Batman: Return of the Caped Crusaders and Batman: Gotham by Gaslight respectively. Sam Register is on-board as executive producer.

According to THR, other confirmed contributors include Jordan Rodrigues as Lui Kang, Patrick Seitz as Scorpion and Hanzo Hasashi, Steve Blum as Sub-Zero, Artt Butler as Shang Tsung, Darin De Paul as Quan Chi, Robin Atkin Downes as Kano, and David B. Mitchell as Raiden. We also have Ike Amadi as Jax Briggs, Kevin Michael Richardson as Goro, Grey Griffin as both Kitana and Satoshi Hasashi, and Fred Tatasciore as Demon Torturer.

Of course, this isn't the only Mortal Kombat-flavoured movie in production right now. Director Greg Russo has his fingers in a couple of video game movie pies, including a live-action 2021 Mortal Kombat movie that we already know will have an R-Rating and fatalities, as well as a Resident Evil reboot according to IMDb.

Russo also recently opened up and revealed he's interested in bringing BioShock to the silver screen, too.

“I would love to figure out a way to do BioShock and I’ve tried,” Russo said last year. “I've been like elbowing everybody I can possibly find, because I think I have a really awesome way to do it that would be really fun.”

Looking for a video game film that isn't terrible? Here are the best video game movies.