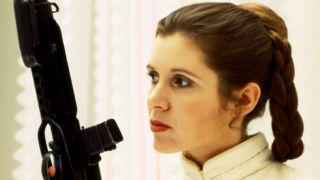 Carrie Fisher’s legacy will live forever. Want proof? Just check out the outpouring of love, memories, and magical moments on what would have been the Star Wars: The Last Jedi star’s 61st birthday. Even Carrie’s pet dog, Gary, is getting involved, so be sure to get the tissues ready.

First off, Fisher’s daughter Billie Lourd – who tragically also lost her grandmother just a day after her mother’s passing – took to Instagram to show off an old family photo of the two.

There’s also a tattoo of the stars and moon adorning Lourd’s ankle, a carbon copy of the one her mother had.

In case you weren’t already holding back the tears, this will get the waterworks going: a pic of Carrie Fisher cuddled up alongside her bulldog Gary.

Of course, with Fisher being the icon that she was, and still is, it goes without saying that it’s not just her family that were touched by her greatness. Mark Hamill weighed in with another photo of the two taking to the dancefloor a long time ago in a hall far, far away. It’s all kinds of sweet.

Fans also took to Twitter to pay tribute to their favourite princess. Below is just a taster of those who had their lives so positively affected by Carrie Fisher across so many years. I could post them all but we’d literally be here all day.

Happy birthday, Carrie Fisher. She would have turned 61 years old today. We miss you so much, Carrie. #AlwaysWithUs pic.twitter.com/FYrEkbb55R21 October 2017

#OnThisDay 1956: Actress Carrie Fisher was born. Here she is in 1977 on Nationwide, talking about a new film called 'Star Wars'. pic.twitter.com/8fINWBEGQK21 October 2017

Today would have been Carrie Fisher's 61st birthday. Our princess, our general pic.twitter.com/LQTMhEq4qu21 October 2017

There was even a repeat of that brilliant tribute video from earlier this year; Carrie Fisher in all of her resplendent glory and, fittingly, with a great big smile on her face.

On Carrie Fisher's birthday, we remember The Princess. May The Force be with you, Carrie. pic.twitter.com/SxcpprpsYI21 October 2017

Even if she’s no longer with us, Carrie Fisher will always be in our hearts. And remember, to honour her legacy is to have fun along the way:

"If my life wasn't funny it would just be true, and that is unacceptable." CARRIE FISHER22 October 2017