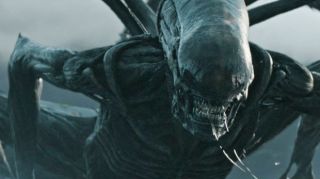 It turns out the future of law enforcement is also the past. The announcement that Little Monsters director Abe Forsythe is making a new RoboCop – one that reportedly pretends the sequels and 2014 reboot never happened – is clearly designed to get Generation X yelling “I’d buy that for a dollar!” And yet it seems a very risky proposition.

Sure, hardcore fans will probably lap it up, but will anyone else care? Recent history is not on RoboCop 5’s side… The evidence suggests the world has fallen out of love with movie franchises that hit big in the late ’70s and ’80s. Terminator: Dark Fate may have been the series’ best instalment since 1991’s Judgment Day, but it hardly made a killing at the box office. Alien: Covenant made a big thing of leaning closer into the parent movies than Prometheus, but ended up making 40 percent less cash.

Recent Predator and Ghostbusters reboots have also failed to do enough business to win sequels, while Halloween was considered a hit because its comparatively small budget and R-rating significantly lowered the bar for success. It’s not all about the money, of course. But ’80s reboots are often creative dead ends. Even when they’re hailed “a glorious return to form!”, films like Dark Fate are extremely limited in storytelling terms – it’s hard to stray too far from an easily recognisable formula without alienating fans.

Have any 21st-century instalments of Indiana Jones, Alien, The Terminator or Predator felt like essential additions to their respective sagas? Without them, would any of their mythologies be demonstrably weaker?

Solo and The Rise Of Skywalker's disappointing performances showed that not even Star Wars can milk nostalgia indefinitely, so there’s a lesson here for custodians of smaller franchises. Just because people adore Stranger Things doesn’t mean they’re obsessed with the movies that inspired it – these days they’re much more interested in their stories, franchises like the MCU and Fast & Furious.

As someone whose movie education began with ’80s classics, I’ll be as happy as anyone if 2020’s Ghostbusters and Top Gun sequels turn out to be must-sees. But most of the giants of that era have surely run out of exciting things to bring to the party. Or is it just me?