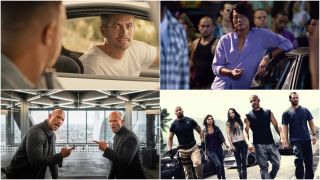 The Fast and the Furious franchise has become one of the most commercially successful and enduring cinematic universes going, thanks primarily to its consistently high level of quality and Vin Diesel's penchant for wanting more and more explosive set-pieces each movie. It’s no wonder, then, that Universal has expanded the franchise with a new spin-off film centred on fan favourites Luke Hobbs and Deckard Shaw.

Fast & Furious Presents: Hobbs & Shaw sees Dwayne Johnson and Jason Statham return as the government agent and ex-spy, respectfully, with the duo facing a slew of new and deadlier enemies, including the predictably brilliant Idris Elba as the villain Brixton. But how does the new film stack up against the eight previous main-series Fast & Furious movies? Here’s our ranking of every high-octane installment from the last twenty years. Let us know whether you agree in the comments below!

After making a small cameo at the end of Tokyo Drift, Fast & Furious, the fourth movie in the franchise, marked Vin Diesel and Paul Walker’s return, along with Michelle Rodriguez and Jordana Brewster. Brian (Walker) is now working for the FBI and Dom (Diesel) returns from hiding to find the person who killed Letty (Rodríguez). This brings them together again as they deal with a drug baron who uses drag racers to deliver his drugs from Mexico across the U.S. border. Fridging Letty aside, there’s something about the performances that doesn’t quite connect. Plus, the drug lord narrative plays too similar to what we saw in 2 Fast 2 Furious, making this film feel less of a fresh reboot and more a retread of old tarmac. Still, those cave racing scenes are pretty nail-biting.

The only main-series Fast & Furious film that does not feature Diesel, the first sequel follows Brian, who is hiding out in Florida after getting in trouble for letting Dominic getaway in the first film. Earning money as a street racer to keep himself afloat, Brian’s approached by his former boss to help take down an Argentinian drug baron alongside Eva Mendes’ undercover agent and his old pal Roman Pearce (Tyrese Gibson). The best thing about this movie is the introduction of much-needed humour through Gibson and Ludacris’s character Tej. Though there are some cool car races and chases, Brian and the storyline aren’t quite as compelling without Dom, Letty or Mia to play against.

The first movie without Walker, following his untimely death in a car accident, really pushed the ridiculousness up to 11. The story takes off when the crew are forced to go up against their old friend Dom, who has been coerced into working for cyberterrorist Cipher (Charlize Theron). They get help from Hobbs (Dwayne Johnson) and, of all people, Deckard Shaw (Jason Statham), whose latter fight sequence is huge amounts of fun and screams Hardboiled. Sadly with a push towards even more outlandish set-pieces, including a race across ice against a submarine, becomes too absurd and, without Walker, it loses much of the emotional heart that keeps the story flowing.

Following a disappointing return of the main characters in Fast & Furious, the fifth movie reinvigorated the franchise, thanks namely to the introduction of Johnson’s Luke Hobbs and a push away from street racing and more towards having a heist movie storyline. Of course, there are still car chases, but there’s certainly an Italian Job sensibility mixed with brilliant action and fight sequences. The story sees Dom, Brian and Mia enlist some old friends to help steal from a corrupt Brazilian businessman, all while being pursued by D.S.S. agent Hobbs. More levity and better writing raise the stakes for this film and welcomes a new exciting phase for the franchise.

Fast 6 continues the good work from the previous film but this time sees Toretto and Hobbs working together, begrudgingly, to stop Luke Evan’s Owen Shaw from stealing a government chip. The movie also brings Letty back into the fold after she turns up alive with amnesia, and Rodriguez is on seriously top form, both behind the wheel and bare-knuckle fighting with Gina Carano. Meanwhile, Gal Gadot shows just why she was cast as Wonder Woman as former Mossad agent Gisele, who debuted in the fourth movie. Moving into spy territory, Fast & Furious 6 has more of a Mission Impossible feel and the addition of big stars like Kurt Russell and Jason Statham shows just why the Fast Franchise became a box office force to be reckoned with.

While Lucas Black might not have been the most captivating lead, director James Wan and writer Chris Morgan’s Fast & Furious debut was a refreshing addition, despite its reviews, and introduced one of the most popular characters of the franchise: Han. The film follows American teen racer Sean who, after getting into trouble for causing serious damage during a drag race against a rich kid, is sent to stay with his father in Japan. There, he gets caught up in the drifting racing scene. Trouble with the local Yakuza gang ensues. The slick race sequences and cultural details make up for a bit of a mundane plot, but Sung Kang’s cool performance as our ill-fated Han gives it some much-needed edge and a shows just why they wrote the sequels as prequels, all so they could bring him back.

This spin-off may not feature any of the original cast but it still packs a punch thanks to the unfriendly buddy match-up of Johnson’s Hobbs and Statham’s Shaw. Feeling more like a superhero movie and serving up less earnestness than the main franchise films, the two eponymous frenemies are forced to team up to stop Idris Elba’s superpowered bad guy Brixton, who wants to get his hands on a deadly virus. When Shaw’s sister (played by Vanessa Kirby) is accused of being a traitor, the three must team up to clear her name and stop the bad guys. Thanks to some special additions to the cast, this is arguably the funniest installment yet. The movie doesn’t skimp on the car chases or choreographed fight sequences, either, and even has The Rock doing his best Captain America impression. More from these two, please.

It might show its age in comparison to later instalments, but The Fast and the Furious is still the OG and should be respected as such. Point Break meets drag racing, the movie sees Walker play an undercover cop, Brian, who gets pally with local mechanic and racer Dominic Torretto, the leader of a burglary team who steal from trucks while driving black Honda Civics. Directed by Rob Cohen and written by Gary Scott Thompson and David Ayer, the first movie in the franchise is a solid B-movie with blockbuster action sequences that elevate a somewhat dated script. Walker, Diesel, Rodrguez and Brewster establish a brilliant chemistry that has been captured in every instalment since.

Furious 7 is where the franchise really found its groove after moving away from its street-racing origins and entering espionage territory. A brilliant balance of action and narrative depth is achieved with the introduction of Jason Statham as the new villain Deckard Shaw, the brother of Owen Shaw who promises to exact revenge on Dom and the crew. They are, however, preoccupied after being recruited to stop a hacker’s surveillance program getting into the wrong hands. While Furious 7 might follow the cliched sequel schtick of being bigger and bolder than its predecessors, director James Wan handles the action sequences – most notably some jaw-dropping skyscraper hopping – with as much finesse as Dom behind the wheel at 140 miles an hour. The film also offers a touching tribute to Walker (in his last movie before his death) that feels heartfelt but without diving too far into cheesy sentimentality.

Want more Fast & Furious? Check out our interview with the star Jason Statham.