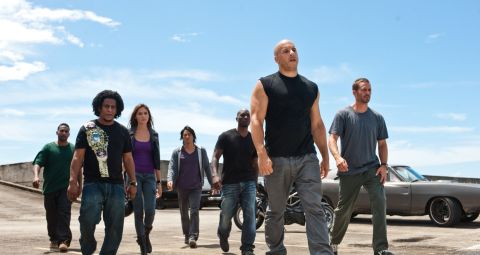 The reported $250m budget is all up there on the screen… and reduced to a charred, mangled wreck. Supersized set-pieces with an even bigger heart.

The franchise still has va-va-vroom...

By rights, Fast & Furious 7 should be spluttering on empty. Few franchises ever reach such a number, and those that do hardly serve up memorable movies; go on, try naming the full titles of the seventh entries in the Friday The 13th, Halloween, Hellraiser and, er, Air Bud series. Factor in a new driver behind the wheel – Justin Lin, director of F&F 3-6, is replaced by The Conjuring's James Wan, who of course has form with the Saw franchise, another 7-upper – and you might expect the series to stall. Then consider the tragic death of star Paul Walker midway through the shoot and it's a miracle that F&F7 even trundled off the starting grid.

So it's great to report that Wan has fashioned a nitro-fuelled thrill-ride that forms a fitting tribute to its blue-eyed bro. 'For Paul' reads the dedication, and so fast, furious, ginormous, crazed, maxed-out and heart-on-sleeve emotional is this gloriously ludicrous instalment that it's impossible to see where an eighth could go.

The action picks up precisely where Fast & Furious 6 left off. That outing’s big bad, Owen Shaw (Luke Evans), is comatose in hospital, and his perma-frowning older brother Deckard (Jason Statham) is out for a hot plate of revenge. After tussling with Hobbs (Dwayne Johnson) at his DSS offices in LA – a normal movie’s entire budget is blown on throwing the pair through plate glass windows – Deckard heads to Tokyo to kill Han (Sung Kang) and return the franchise to a present that leads off from the third chapter, Tokyo Drift (parts 4, 5 and 6 were effectively flashbacks).

Looks like Dom (Diesel) and his ‘family’ (Paul Walker, Michelle Rodriguez, Tyrese Gibson, Ludacris) will be picked off one by one unless they agree to work for shadowy government man Petty (Kurt Russell) to retrieve computer genius Ramsey (Nathalie Emmanuel, who rivals Blackhat’s Chris Hemsworth in the ‘unfeasibly beautiful hacker’ stakes) from the evil clutches of terrorist Jakande (Djimon Hounsou). Why? She’s created a tracking device, God’s Eye, that will… Oh, who cares? All that really matters is that the gang ricochet between Tokyo, the Dominican Republic, Azerbaijan, Abu Dhabi and LA while The Stath, clenched from head to toe, turns up repeatedly like some constipated Terminator.

Given the rewrites and schedule juggles necessitated by the production’s shutdown, it’s inevitable that the plot is lumpy and the film ill-balanced – having Hobbs disappear for the entire midsection leaves a Rock-sized hole in the screen. There are other niggles, too. Or rather seismic grumbles – ‘niggles’ is too small a word when discussing a picture where a bunch of muscle cars skydiving out of a plane to thump onto a precarious mountain road for a pedal-to-metal, bullet-torn, 20-minute (!) chase is one of the less outrageous set-pieces.

And so we have Ong-Bak’s Tony Jaa woefully underused as a fists-of-fury henchmen, while the decision to rob his brutality of its beauty with a barrage of cuts is indicative of Wan’s set-piece stylings as a whole. No doubt action-maestro George Miller will bring greater fluency and coherence to the vehicular carnage of Mad Max: Fury Road, but Wan’s up-close-and-personal, down-'n'-dirty methods (let’s call it the ‘messy-flurry’ technique) at least bring immediacy to the CGI-heavy sequences – they feel as raw and dangerous as a post-pub brawl in a piss-reeking alley.

Chances are, by the end of F&F7 you’ll feel like you were standing between Diesel and Statham as they went at each other with giant car wrenches (yes, this really happens, for quite some time). It’s the job of each movie in this franchise to be more fast and furious than the one before, and here the relentless spectacle offers a car leaping between skyscrapers, Walker running along the top of a bus as it teeters off a cliff (The Wages Of Fear didn’t have that) and a night-time chase and conflagration in LA that involves a chopper, a drone, multiple automobiles and Statham surviving a multi-storey car park landing on top of him. Make no mistake, we’re in superhero territory now, with Dom and his crew just about ready to hand the Avengers their asses.

And then there’s Walker, his passing bringing real emotion to the extravagant proceedings. With his filming completed via body doubles (including his brothers, Caleb and Cody) and digital trickery, his physical presence, as well as his spirit, haunts the movie throughout, and the fond farewell is beautifully handled. Suddenly all of Dom’s platitudes about family make meaningful sense, and any blokes who have strutted to the cinema for hot-rods, bikinis and heavy-metal destruction will likely find themselves cursing the something in their eye as they exit into the lobby lights.

The reported $250m budget is all up there on the screen… and reduced to a charred, mangled wreck. Supersized set-pieces with an even bigger heart.