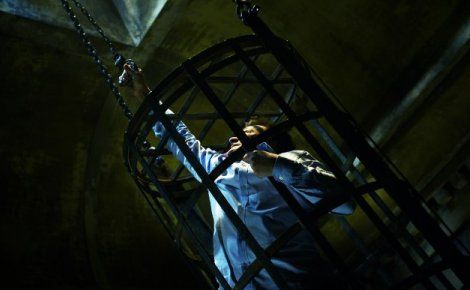 The Saw franchise continues to be one of the most divisive horror series ever, maligned as crass commercial trash by horror purists but beloved by less obsessed thrill-seekers.

Saw 3D – improbably touted as the ‘final’ film in the series – will do little to inch either camp in a different direction.

Dagen’s used his story to become a successful self-help guru, much to the chagrin of now-dead Jigsaw’s shadowy minions.

Said lackeys concoct a new set of stabby, limb-chopping traps in which to snare Dagen’s friends and family, forcing him to once again face Jigsaw’s judgment. Plenty of blood and screaming ensues.

To director Kevin Greutert’s (Saw VI) credit, there are several major twists, one very unexpected character from a prior Saw returns, and (nearly) everyone dies in the end, so this entry does, at least, feel like a grand finale.

On the other hand, the 3D is barely-there, the clanging machine-rock soundtrack is merciless, and the traps are decidedly ho-hum. Even running its final lap, Saw still oozes mediocrity.