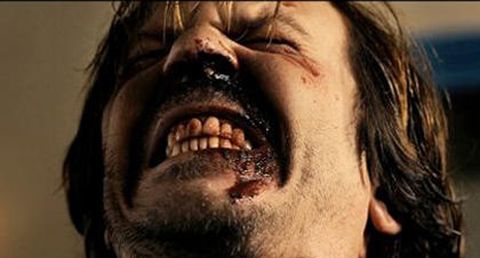 Only Milos doesn’t know what he’s signing up for.

Told he’s about to front an “artistic statement”, he’s collected by granite-faced goons in black glasses and blacked-out limos and driven to set in deafening silence…

Chances are you already know more about Milos’ fate than he does. A Serbian Film is, after all, this year’s red-flag title, pulled from horror festival FrightFest when the BBFC requested three mins, 48 secs of cuts (compared to the 17 seconds snipped from the gruelling, tonally suspect I Spit On Your Grave remake).

None of which is half as distressing as it sounds; scenes are carefully blocked to avoid graphic gore, villains are pantomimic and the tone is closer to Hammer, Dr. Phibes and Hostel 2 than Last House On The Left, Irreversible or, an obvious influence, Pasolini’s Salò.

More camp than corrosive, A Serbian Film is hard to take seriously. Factor in the propulsive plotting and too-sleek direction and it’s clear a better title would have been A Serbian Movie.

Not that there isn’t serious intent. Spasojevic is here fashioning an allegory for Serbia’s war-torn plight, with the violence and violation representing, albeit opaquely, the lies, corruption and brutality foisted upon a people.

But the aesthetic is glossy, the content hysterical, and events hurtle towards a cataclysmic finale that would devastate were it not so predictable, overwrought and crushingly symbolic.