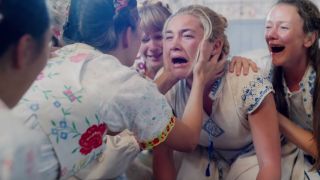 Midsommar, the new horror movie from scare extraordinaire Ari Aster (who also directed the wickedly-terrifying Hereditary) is just weeks away. But a select bunch have managed to watch the movie earlier and, well, judging by their reactions, they won’t be sleeping until release day. But it’s not all chills – Midsommar is also a movie that brings the laughs too. Intrigued? Take a glimpse into possibly one of the best horror movies around with our whistlestop tour of the world-first reactions.

You won't be sleeping anytime soon

First things first: Midsommar is scary. It’ll worm its way inside your brain and stay there for a long, long time. Don’t take my word for it: Here’s what some of the people who were frozen for two hours-plus have to say.

MIDSOMMAR is a mind-fuck of the highest order, channeling (yet again) a young woman’s journey through grief. Deliberately paced but never boring (those 140 minutes FLY by). Pugh is excellent. There is some imagery that I want plastered on my wall. Don’t miss this one, folks.June 19, 2019

#MIDSOMMAR is truly something special and it will also fuck up your entire life. The “Break-Up” movie of the decade.June 19, 2019

MIDSOMMAR: a wickedly funny romp with Ugly Americans and Freaky Swedes in the woods, a premium cut of one of my favorite subgenres (daytime horror), and just so confidently made. Ari Aster takes the very idea of a sophmore slump and sets it ablazeJune 19, 2019

MIDSOMMAR: swooning, unnerving, and exhilarating. I think I loved it. Ari Aster brings dread to daytime, flowers, and smiling faces.June 19, 2019

Ari Aster is on a roll

The difficult second album (or, in this case, scarefest) can trip over many a fledgling artist. Not so Ari Aster, whose direction elevated Hereditary to new heights and it looks like he’s done the same thing second time around.

#Midsommar: Aster has gifted a new generation their THE WICKER MAN. It’s a warm invitation into subtle madness, decked out in pastel reassurance. My lord. Almost 150 minutes FLIES by. Masterful mania played with such festivity. I...love it?June 19, 2019

MIDSOMMAR: Like with HEREDITARY, Ari Aster uses overwhelming grief as a gateway into a slowly escalating tunnel of nightmares. Not a visceral scare-fest, but something so much more unpleasant, darkly funny and yes, totally fucked.June 19, 2019

Florence Pugh is the next breakout star

Pugh, who last starred in Fighting With My Family, is getting all the plaudits for her turn in Midsommar. Could we be looking at the next big Hollywood star? Don’t bet against it, judging by these reactions and the fact she’s lined up to join the MCU in the Black Widow movie next year.

#MIDSOMMAR. wow. i don’t know that i’ve ever felt so gutted and seen by a movie. i felt sick, i felt joy - i felt so much. above all else: i’ve never seen such a wicked, accurate depiction of intoxicating mania. i adored it and i hate it. florence pugh is god level.June 19, 2019

Things that are great about MIDSOMMAR:1. Florence Pugh.2. Henrik Svensson's next-level production design.3. Pawel Pogorzelski's slow, steady camera that lulls you into a state of calm.4. Ari Aster meditating intensely about trauma and loss in the most fucked up ways.June 19, 2019

Ari Aster’s #Midsommar is one of the most gorgeous, completely dreadful experiences. Florence Pugh is a quiet riot.June 19, 2019

Tonight is the first time people will see Midsommar.A) I’m so sorry I can’t be there to join the Q&A.B) this film extracted sweat, tears and PTSD from the making of it.C) the film made me wiser, bolder, stronger AND weaker during and after the film. D) we are proud #MidsommarJune 19, 2019

If you manage to peek out from behind your hands long enough, there’s a chance that Midsommar might give you a fit of the giggles. Unlike the (understandably) dreary Hereditary, there’s plenty of fun to be found among the terror here.

#Midsommar is fucking hilarious and that’s actually not a joke. It’s a lot of other things too, sure, but let’s focus on what’s important.June 19, 2019

Going to join the chorus and say I absolutely loved #Midsommar. Ari Aster nails guttural, raw emotion. But this time? So much joy and humor with the fucked up pain. Legit feel good horror for me.June 19, 2019

How Midsommar compares to Hereditary

The signs are good. Essentially, if you liked Hereditary, you’re going to love Midsommar, even if it might not be as bone-chilling. Maybe that’s a good thing. I still haven’t recovered.

I was super nervous going into #MIDSOMMAR because of my deep love for Hereditary, but holy shit you guys, @MidsommarMovie is a masterpieceJune 19, 2019

Like HEREDITARY, I feel like I’ve already seen quite a few of the tricks MIDSOMMAR has up its sleeve, BUT: I prefer it to that film (it’s def gnarlier!) and am pretty sure it’ll play well to the morbidly curious masses. My full, largely positive review will hit BMD tomorrow.June 19, 2019

MIDSOMMAR didn't shake me quite as much as HEREDITARY did, but it's a much different film, more interested in enveloping the audience in the seductively banal horror of ritual—in making madness look like wisdom, in the wrong (broad day)light. More...tomorrow, probably.June 19, 2019

Need more reasons to hide behind the sofa? Here are some of the best horror games you could be playing right now... if you dare.