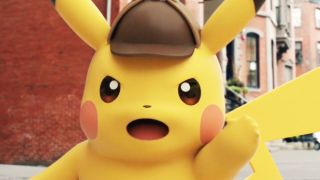 If you told me back when I was training my first Bulbasaur that a major motion picture that follows a hardboiled Pikachu detective was going to happen, I would have waved it off as another schoolyard myth. "Yeah, and I bet he'll find his partner Mew under a truck, too." But here we are roughly two decades later, with Deadline confirming Legendary Pictures and The Pokemon Company have signed a deal for a live-action Pokemon movie starring Detective Pikachu. We live in strange times.

What makes this story even weirder is the fact that The Detective Pikachu game hit the Japanese 3DS eShop in February of this year, but Nintendo has made no indication that it plans to release it elsewhere. So we could get the film adaptation but not the actual source material. I guess it's easier to turn into a movie than the international phenomenon that likely spurred the renewed film discussions, Pokemon Go.

Legendary previously produced the Warcraft movie, another film based off a popular video game franchise. I wouldn't expect them to share many narrative threads (unless Detective Pikachu's trying to avert a cataclysmic war between Pokemon and Man) but Legendary has some experience with putting together live action/CGI hybrid films, at least. If they can just lock down Danny DeVito for the lead role it should all work out fine.