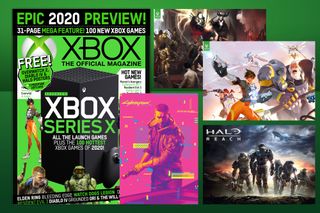 Xbox Series X is here! Microsoft has finally unveiled the look and name of its next gen console, that will be with us in 2020. With all the graphics, a raft of amazing launch games and a ton of power beneath its sleek, obelisk-like exterior, we're beside ourselves with excitement. We take a closer look at how Microsoft is giving its next-gen gaming monster a ton of X-appeal in Official Xbox Magazine.

"Xbox Series X will be our fastest, most powerful console ever and set a new bar for performance, speed and compatibility," says Xbox head honcho Phil Spencer, "allowing you to bring your gaming legacy, thousands of games from three generations and more forward with you." That means ALL the games, via back-compatibility and free to play with a Game Pass sub, and some mouthwatering exclusive launch titles too.

Xbox Series X will have a killer GPU (graphics processing unit) which will help its launch titles such as Halo Infinite and Hellblade 2 look incredible. "We wanted to have a dramatic upgrade from the Xbox One base console," says Spencer. "So when we do the math, we're over eight times the GPU power of the Xbox One, and two times [the raw graphical power] what an Xbox One X is."

Read everything we know about Xbox Series X in the February issue of Official Xbox Magazine, out now. Plus there are free gifts of a giant Halo Reach poster, double-sided Overwatch and Diablo IV poster plus Cyberpunk 2077 art card.

Of course, we're here for the games, right? But even before Xbox Series X launches with its next-gen exclusives, there are a ton of great games coming in 2020. In our massive preview feature this month, we detail 100 games coming to Xbox this year.

Then we talk to Xbox Game Studios head Matt Booty about what we can expect from this year's first-party exclusives, and just what Rare, Obsidian, Ninja Theory and more are up to.

We all love a good scare, right? In this month's OXM we look at the history of horror games on Xbox. We also bring you in-depth, trusted reviews of all the latest Xbox games including Ancestors: The Humankind Odyssey and more. Every month in OXM you'll find everything you need to know about the best games, streaming, hardware and more, to maximise your Xbox experience. It's all in this month's Official Xbox Magazine.  Plus there is an awesome Halo Reach poster, Diablo IV and Overwatch double-sided poster and a Cyberpunk 2077 art card, all free with this month's OXM.

We love our Xboxes, and all the great games that have ever been on it. In this month's OXM we revisit a true Xbox classic, as Rare's Gregg Mayles tells the story behind the divisive, sandbox off-shoot from the bear and bird's hit platforming series.