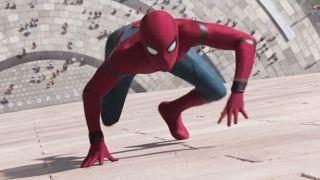 Spider-Man: Homecoming won't arrive until summer, but Marvel and Sony have already confirmed that the young webslinger's second solo film will hit theaters on July 5, 2019. That puts it a few months after the untitled follow-up to Avengers: Infinity War and, er, confirms that the world won't end in the big team-up movie. But more importantly, it also secures Spider-Man actor Tom Holland's legacy as the Spider-Manliest of them all.

Not sure what I mean? Let's consult the Spider-Man cinematic portrayal scoreboard:

These were made-for-TV movie edits of the '70s Amazing Spider-Man show, but they still count, dammit.

Yep, that's four cinematic Spider-Man appearances for Holland, working off the pretty safe assumption that he'll show up in at least Avengers: Infinity War or its sequel. Failing that and he'll still tie Hammond and Maguire with three. Then he'll win the tiebreaker round as the only Spider-Man actor to ever actually look like a teen.