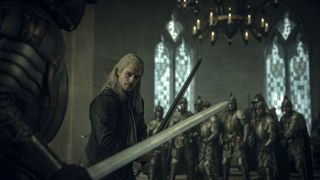 After months of build-up, The Witcher Netflix series has finally arrived. Has Henry Cavill's take on the brooding Geralt of Rivia been a hit with the critics? The early consensus is certainly mixed, with publications giving varied responses, ranging from declaring the new show to be "the next Game of Thrones" while others (including this one) saying it falls short of the mark.

Below, find a spoiler-free selection of The Witcher Netflix series reviews from across the spectrum, including – as Geralt says in the premiere – the “greater, lesser, and middling".

"The opening episode of The Witcher, then, is a mixed bag. It reaches out to be called 'the next Game of Thrones', but falls short. Cavill’s Geralt fails to make a lasting impression, while the overarching questions being posed aren’t engaging just yet. However, with such bloody battles, and the promise of an epic journey, I’m certainly intrigued to see where this goes."

"There are attempts at knowingness: at one point, our Henry tells someone a prophecy has to rhyme. This is not a good idea, as it throws into too sharp relief the limits to what Geralt and his merry band of sorceresses and proto-feminist princesses can be said to know. Play it straight, dear scriptwriters, or don’t play it at all."

"Nothing's been terribly simplified to fit the format. This world is as deep and wide as in the books and games, and while the show definitely uses the dramatic and cinematic language of a lot of modern television, it doesn't feel like a focus group got between Hissrich and her team's vision. This is an unrelenting fantasy-ass fantasy story, nothing of major import buffed down to make it more palatable to a wider audience... Netflix's The Witcher is an excellent adaptation and some of the most exuberant fantasy TV out there."

"If any of this description has lost you, it’s the fault of the show. Like Game of Thrones or Outlander, The Witcher is serving two masters – an audience transferring loyalties from other fantasy TV shows, and an audience already deeply committed to the Witcher lore. The latter group – as we are seeing from Star Wars fans – is a more vociferously critical caucus, and in pandering to them, The Witcher is a messy tangle of plotlines in a world underdeveloped to the point of obscurity. The experience is not unlike playing a video game, where deaths, diversions and reboots leave you constantly unsure of your exact position in the narrative. Sadly, for The Witcher, and House Netflix, their offering lacks even that modicum of fun."

"As a Witcher watcher but not a reader, I felt the universe at times both overly broad (in its resistance of the single hero) and a bit narrow. Unlike Thrones, it resists allegorical or metaphorical readings, at least at first, and is firmly about what it’s about — magic and myth. That itself is less a flaw than simply design, but it does suggest that the appeal of this series may be limited to those already under its spell."

"The Witcher knows when to not quite take itself seriously. For every bloody battle, gruesome monster, or dire portent, there’s a gag, a cheesy bard song, or, indeed, Henry Cavill in a bathtub. At its best, it balances these elements to create a story that, if not quite the most dramatic fantasy saga, is fun to watch. But it’ll take a good bit to get to that fun."

Geralt is neither a hero nor an anti-hero, and while The Witcher is not an epic fantasy, per se, it’s neither the same vein of grimdark we find in Thrones. It’s a unique beast – epic, sure, but also more grounded – and a monumental undertaking, filled with surprises and bursts of violence. Nor is it Tolkienesque despite its elves and dwarves... If you’re looking for an original dark fantasy with some horror elements, some bare skin and plenty of blood and gore (and monsters) look no further. The Witcher, I am quite sure, is destined to surprise and delight.

"This is the first TV show I’ve ever seen that would actually be better with commercial breaks. The goofy syndicated fantasy of yesteryear had to have a brisk pace, building every 12 minutes to an act-breaking cliffhanger. The Witcher fully embraces the endless-movie layout of the worst Blank Check streaming TV. At the end of the series premiere, someone tells Allen’s Princess Ciri that Geralt is her destiny. In episode 5, people are still telling her that Geralt is her destiny. I assume they will meet in the season finale. Alas, my destiny is to never watch this borefest ever again."

Want more on The Witcher Netflix series? Then check our interview with actor Henry Cavill on how the show will impact him returning as Superman.