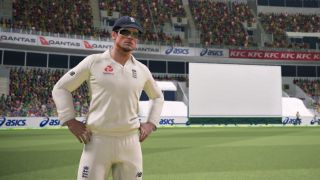 There’s no bigger event in cricket than the Ashes series between England and Australia. And, for a time back in the ‘90s, there was no sports game more universally revered than Brian Lara Cricket for first Mega Drive, then PlayStation. Two decades on, you’d figure a contemporary digital combo of those two things would be cherished unconditionally; yet the official Ashes Cricket game has been out on PS4 and Xbox One for a month, and… no one seems to care. There’s little social media buzz. It’s had just 21 reviews on Amazon. Its performance in the charts has been as flaccid as England’s Down Under.

The curious aspect to all this is that the game is actually really rather good. Developed by Melbourne studio Big Ant, it’s effectively the third outing in the well-regarded Don Bradman Cricket series – and there’s no question that, in terms of realism, it’s superior to any Lara effort. Its best feature is true contextual batting, where right stick movements enable you to guide the ball to any area of the pitch, but it’s also strong off the field of play.

For instance, you can instantly overwrite any team in the game with the most popular fan-made equivalent, enabling you to have real kits and updated squads with literally a single X-button press. Imagine that functionality in certain other sports games. [Cough, PES 2018, cough.]

The contrast from as recently as five years ago couldn’t be starker. In late 2012 I was editor of the UK’s Official PlayStation Magazine, and we received heavy, constant reader correspondence surrounding the release – or rather, non-release – of Ashes Cricket 2013. Championed for months by publisher 505 Games as the willow-waving title that would finally surpass Lara, its much-heralded arrival was repeatedly put back over the following year, until it finally emerged for Steam alone in November 2013. It was so bad the game was removed from sale four days later, and never made it to console.

That non-game triggered 12 months of justified fan fury; on a global scale the new, actually released one has barely registered 12 days of fan delight. Why, though? Perhaps it’s simply because the real cricket isn’t connecting with the masses like it used to. “Most members of England’s squad enjoy the sort of obscurity you’d expect from one of the better witness protection programmes,” wrote Marina Hyde in a recent Guardian piece, and she may be onto something from a gamer’s perspective too. A decade ago fans longed to play as PS3 versions of Shane Warne or Andrew Flintoff. With no disrespect meant to leading English run scorer Dawid Malan or Aussie wicket taker Mitchell Starc, their virtual equivalents just aren’t as alluring.

If marketability is a factor, so too is marketing. When I put out feelers on Twitter as so what Lara die-hards thought of the game, almost all those who responded had never heard of it. One, Rich Smith, said he was oblivious to its existence despite being a devotee of predecessor Bradman 17. Even a wallet-friendly price point of £19.99 has failed to spark fan fervour: it fell to #39 on amazon.co.uk’s PS4 gaming chart just four weeks post-release.

Other fans are aware of the game, but won’t buy it due to a lack of trust: not in Big Ant, but of the genre as a whole. The Ashes Cricket 2013 debacle, coupled with various other perceived failures and EA’s abandonment of the sport after a successful PS2 dalliance, have left long-standing fans cynical about trusting anyone to make a licensed, realistic bat ’n ball simulation.

“[Recent] incarnations, including the Brian Lara series have toyed with next-gen capability but never really delivered,” writes Brett R, also on Twitter. “Having played FUT for so long, it’s frustrating picking up ‘licensed’ cricket games to find no player likenesses and generic names.”

I’m aware of it mate, my boss at work was only speaking about it yesterday haven’t bought it , I find the newer games a lot more complicated to play I prefer the way it used to be, I think u can improve graphics and gameplay without making it harder to playDecember 20, 2017

Even knowing Ashes has real – albeit basic – likenesses, Brett is tentative about snapping it up. “The last cricket game I bought and enjoyed was EA Cricket 2007. I’ve bought subsequently but always felt I’ve wasted my money and barely played them. Studios and publishers are going to have to do something to win me over again. Getting demos up would be a start.”

My understanding is that no demo for Ashes Cricket will be forthcoming, though I’ve contacted Big Ant for clarification. That’s a shame, because it merits at least a test match, if you will, from those who feel burned by historic contemporaries. As Smith says, the Bradman series as a whole in comparison to Lara is “more in-depth, [has] more customisation, is less pick-up-and-play and less arcadey. DBC feels very much like a sim compared to BLC’s slightly more attacking orientated gameplay.”

As a dad to two girls, I’d offer my own personal stamp of approval regarding Ashes Cricket’s advances in the women’s game. It features 70 female squads and a lady commentator in Mel Jones. My eldest daughter is already sports-mad, and if she develops an interest in gaming somewhere down the line, I’d like her to have the option to play as characters and professionals of her own sex.

Even if the women’s teams do nothing for you, there’s lots to like here. A common tagline I attach to brilliant baseball series MLB The Show is “the greatest game you’ve never played”. Ashes Cricket isn’t perfect, and some stilted animations and cold presentation options prevent it getting close to MLB’s brilliance. But within the cricketing realm it merits a similar description, and Australia’s reclaiming of the little big urn isn’t the only success story to emerge from Neighbours country this winter.

Ashes Cricket is out now for PS4 and Xbox One. If you're in the market for more niche sports offerings, be sure to check out the 11 best current football games that aren't called FIFA or PES.