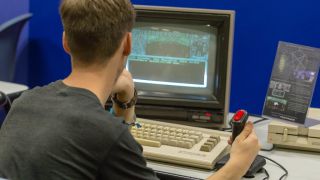 Did you know GamesRadar has a hardware team? Well, technically it's shared with our friends over at PC Gamer, but it is a hardware team nonetheless. And like all humans, hardware writers or not, sometimes we get nostalgic for antiquated technologies that remind us of earlier, simpler times in our lives. Whether it's hardware, software or an experiential mix of both, we miss things. Things that evoke a raw, associative emotion unique to you.

Gaming tech in particular has this lasting effect. Remember the first time you powered on a console? Maybe your character immediately died and you thought to yourself, wow, I don't even have to insert another coin to start playing again. Or perhaps your most striking memory of gaming tech was when you first logged onto Xbox Live and you could hear your friends shouting obscenities on the other side. Discovering new ways to break down communication barriers is always revelatory. But then again, isn't that a huge part of what gaming is all about?

Intrinsically, video games and technology have always been intertwined. And, since the advent of the former, they've served as a vessel for bringing people together. Tennis for Two, one of the first games ever made, was something of an accident, created by a physicist after realizing he could display realistic, simulated trajectories on an oscilloscope. Eventually, Tennis for Two would become Pong, a perfect junction of art and tech, for which our fond recollection is deeply rooted in social connection. But that feeling didn't stop with Pong.

In fact, I asked each member of the GamesRadar central hardware team (CHT) to write a brief passage detailing an example of gaming tech they now miss. Looking back, it's difficult—if not impossible—to think of any point in history where a technology of the past was objectively better than what we have now. That said, our emotional attachment to dated inventions has little do with quality. Sentimentality for the past is instead a product of common emotions, such as melancholy and social detachment. In other words, for a moment, let's escape together.

Regardless, this process fired up the imagination in a big way. It conjured up images of your Pokémon traveling through the wire in a very literal sense, making them feel even more real than they already did. The same is true of battling via the cable. The internet was still an unwieldy beast of dial-up ringtones, so this was the only way we could test our Pokémon trainer skills against each other in multiplayer.

While the process is outdated and impractical now (cheers, Wi-Fi), there was something special about connecting Gameboys and swapping data. In fact, it exists in the same realm as cheat cards that could give you access to unusual Pokémon – did anyone else use their friend’s console and another copy of the game to get themselves each of the starter monsters? Or disconnect midway through the trade to try and clone their favorites?

Nowadays we’ve swapped wires for broadband, of course, and that’s only right. In 2019, there’s no longer need to meet up in person when you can simply jack into the 'net and trade online. However, a part of me still misses the old days...

Ready to feel old? The Nintendo DS is turning 15 this year, meaning we're just a few months away from the anniversary of a novel chatroom app that's yet to be usurped. In 2004, Pictochat was Yik Yak for the classroom, a built-in service for the Nintendo DS that allowed you to – under the guise of anonymity – send messages to nearby recipients using some kind of proprietary ad-hoc technology.

As the name suggests, messages could take the form of words and/or images. Similar to a mesh network, Pictochat didn't require an internet connection, which is great because I was mostly using it on the schoolbus. Evidently, I don't know much about the inner-workings, as I was eight years old at the time. But I do know Pictochat was groundbreaking. And that I probably used it to send a bunch of gross shit to my friends. I was, after all, living wild and free in the early '00s.

Because up to 15 people could join one of four chatrooms at a time, there was a point when you could whip out your DS in public and someone was bound to be "online." (Only they weren't online, were they?) Especially in densely populated metropolitan areas, it wasn't all that uncommon to start chatting it up with a stranger on a train, a bus, or even an airplane. Hell, I once made a friend at Red Lobster over Pictochat.

Grotesque as most of the messages were, there was something magical about the unbridled, locally transmitted chaos that ensued every time I booted up that otherwise frivolous application. These days, nothing – that I'm aware of – comes close to the satisfaction of sending my buddy, who is in the same room, a crudely rendered phallic drawing I made with a Nintendo DS stylus and then receiving a slightly modified version of that same image in response.

Now all I have is AirDropping surreal memes to randos on the train. Please bring back Pictochat, Nintendo. I beg of you.

Does this really count as forgotten gaming tech? After all, Singstar and other karaoke games still exist and are very popular. Surely the technology has simply evolved, and now you don’t need a peripheral, because anyone can just sing into their mobile phone. Well, sure, but it just doesn’t feel quite right, does it?

Unlike the garish plastic guitars of Rockband and Guitar Hero, or the rather try-hard DJ Hero deck (which I loved, but won’t admit to, and if you tell anyone I’ll just deny it), Singstar mics gave us a genuine party atmosphere. If not an actual recreation of being on a stage, singing to thousands of adoring fans, Singstar mics provided a proper karaoke experience in the home.

Getting a couple of colorful plastic mics out of a cupboard and spending three hours untangling the wires kick started any party in a way that saying “Yeah, I’m switching on the PlayStation. Everyone get your phones out” doesn’t. Singstar mics were a focus point – a slice of tech to gather round and compete for. And while never perfect, they worked well with compatible games, and crossed over into other music titles. Shame they’re gone.

If you're under the age of 30, it's entirely possible you don't remember a world without the internet. On the other hand, if you're a dinosaur like me, some of the earliest ways of connecting with the broader world came by way of the painful screeching of a dial-up modem and Bulletin Board Systems (BBSes).

Largely text and ASCII based, BBSes were essentially primitive versions of web pages that you dialed into independently. A lot of the appeal came from the forum-like message boards where you could connect with strangers and chat about the nerdy, niche interests that consumed your free time (a sort of Reddit of the dial-up era). But BBSes were also host to door games. Door games were text heavy affairs that relied in large part on your imagination, but let you slay dragons and explore vast wastelands back when modern CRPGs were still an impossible dream.

They were also some of the earliest examples of online multiplayer experiences. Games like Usurper and Legend of the Red Dragon let you interact and compete with other users for score, power, or position, and some of the most intense gaming experiences of my young life were logging in to find my high level character choking on his own blood, slit throat a cruel introduction to the brutal vagaries of cyberspace.

Sure, these games were largely crude menus and paragraphs of enthusiastic text, but for a kid obsessed with fantasy novels and computers they represented the ultimate intersection of some of my favorite hobbies. They may seem ancient and dusty in an era where our interactive experiences are approaching photorealism, but door games were a huge cornerstone of the foundation that led me to a career in games journalism and a lifetime of obsession with interactive experiences.

Once upon a time, when you bought a game, the whole package went much further than the game itself with some quick setup instructions, and advertisements. Satisfyingly tailored to the box’s size – yeah, there were also different sized boxes for games then, too – a pristine, glossy-paged manual was present too.

This was more than a manual for installation or a book of credits, though. It was a lovingly created book that gave background information on characters and parts of the story, bespoke information with thorough descriptions, narrative pointers and  journalistic levels of background info.

The one for Red Alert on PC, in particular, is one I remember fondly, as it painted a vivid picture of its alternate history lore. Complete with detailed breakdowns of each unit and building type, the manual enabled you to envisage the next base and army you’d create. I flipped through its pages over and over as a kid, taking it to my room for bedtime reading nearly every night.

Another one that was a excellent manual of note was that of Metal Gear Solid for the PS1, which gave awesome character breakdowns of the members of Foxdie, along with wicked drawings of each baddie it comprised. Clearly, it was something you were meant to read, soak up, and enjoy before you played the game, arguably before you even booted it up for the first time.

Nowadays, living in a culture of immediacy, most of us wouldn’t stand for traditional game manuals. So even though they always smelled great, for the time being, I'll have to stick to sniffing PDFs. Thanks, internet.