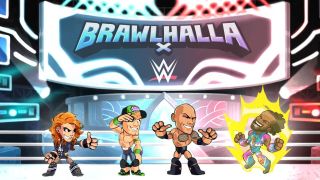 Ubisoft's free-to-play arena fighter Brawlhalla will feature WWE superstars as playable fighters in an Epic Crossover celebrating the upcoming WWE SummerSlam event. The collaboration will allow you to purchase Dwayne "The Rock" Johnson, Becky Lynch, John Cena, and Xavier Woods for 300 Mammoth coins each, all of whom have signature attacks that reference their characters in the WWE.

Brawlhalla is a free-to-play game available for download on PC, macOS, PS4, Xbox One, and Nintendo Switch. The crossover event starts on August 8, but the WWE Superstar Epic Crossover skins will be available for purchase even after the SummerSlam event ends.

If your bank account is lacking but you're craving new games, check out our list of the 25 best free games to play now. Your wallet will thank us.