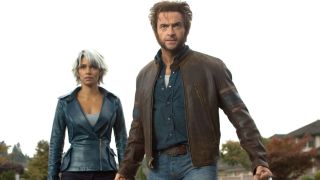 In a new interview Halle Berry, who plays Storm in the X-Men movies, reveals her character has had more than just a working relationship with James "Wolverine" Logan. The revelation explains what we saw in a deleted scene from 2014's X-Men: Days of Future Past. You know, the one with all the time travel and Richard Nixon.

"Storm and Logan used to be lovers. It’s true. Storm and Logan had a thing," Berry told Entertainment Weekly. If you're already forming a slightly worrying mental image, don't worry, she explains that Wolverine's claws weren't an issue for the couple. Sadly his romantic past was. "When he really decided that Jean Grey was his [love] … that caused a problem."

It was something that Hugh Jackman, who plays Wolverine, and Berry came up with on set. Sadly, a charming sitcom about Wolverine and Storm playing house and joking their way through romantic misunderstandings probably isn't in the works.

The interview also touches on the fact that in comic book canon, Storm actually has a romantic relationship with the Black Panther. That relationship takes place when both are young whippersnappers, when she's still just plain old Ororo Munroe and he's still known as T'Challa, yet to assume the role of The Black Panther.

Marvel is currently at work on a Black Panther movie that will be released next year. We already caught a glimpse of Chadwick Boseman in the role in Captain America: Civil War where he comes to the aid of Cap and the Winter Soldier, and his standalone movie looks freaking awesome.

Here's hoping Storm gets lucky in the next X-Men movie.