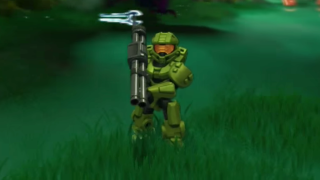 The world of unfinished video games can be pretty dang interesting. Every now and then you see a project that takes something familiar and turns your expectations upside down, putting a new twist to old favorites. Such is the case today, as I present to you a video from YouTube channel PtoPOnline (Past to Present Online) showcasing a long since cancelled Mega Bloks Halo game:

As you can see, this would've proven to be quite the unique twist on the Halo formula, transporting the series from its FPS roots into a kid-friendly platformer with light puzzle solving and third-person shooting. I have to say, everything looks quite nice - the animations, level design, and gameplay seem above and beyond the usual "scrapped together prototype" quality we so often see when these sorts of games surface.

And apparently I'm not the only one who thinks so. Fan reaction has been strong enough that Bonnie Ross, head of 343 Industries, posted a response on the Halo Waypoint forums:

"Over the past few days, footage has recently made the rounds of an exploratory Xbox 360 project we worked on several years ago, known as 'Haggar'. Since then, we’ve received a lot of great feedback from the community. Haggar was something we prototyped with our friends at Mega Bloks that focused on the elements of action, exploration, and user creativity found within the Halo universe. Haggar had a lot of fun ideas and invention behind it, but ultimately didn’t progress beyond the early prototyping levels that are shown in the recent video. This is just one example of several similar projects we have evaluated throughout the years – a process that we continue exploring on an ongoing basis."

So does this mean other weird and unique spins on the Halo universe are in development? Maybe a Cooking Mama-style game starring Master Ch(i)ef? Ross isn't saying that… but she's not not saying it, either.