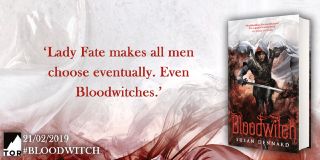 Susan Dennard’s bestselling Witchlands saga is set in a fantasy world of pirates, adventure, and a delicate truce between three countries. It's home to many different kinds of witches, who can use different kinds of elemental magic  – Aether, Void, Wind, Fire, Earth, and Water – that, the author says, were inspired by Avatar: The Last Airbender.

The story focuses on Truthwitch Safiya – who has the ability to tell truth from lies – and her Threadwitch BFF Iseult, whose own powers are a mystery even to herself. Oh, and there's the danger of a war breaking out across the kingdom...

With the third instalment Bloodwitch coming out on February 21, we've got five full sets of the Witchlands trilogy to give away, featuring Truthwitch and Windwitch in paperback, and Bloodwitch in hardback.

To stand a chance of winning, simply answer the question below: