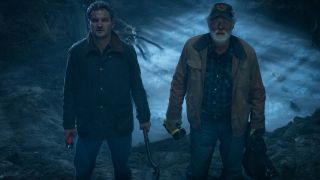 Stephen King’s horror novel Pet Sematary was first adapted for the big screen back in 1989. Now there’s a new take on this macabre tale of all-consuming grief.

It’s centred on the Creeds, a family who move to a new home close by an ancient burial ground with the power to resurrect the dead. Terminator Genisys’s Jason Clarke plays Louis Creed, the father who – having seen the family cat brought back to life – makes a terrible decision after tragedy strikes…

The film is available to buy in Blu-ray, DVD and download formats now. Bonuses on the Blu-ray include an hour-long Making Of, an alternate ending, seven alternate/deleted scenes, and co-star John Lithgow recounting "The Tale Of Timmy Baterman" (some backstory from the book that’s absent from the film).

Thanks to Paramount Home Entertainment we have five Blu-rays to give away. To put your name in the hat for the chance to win one, simply answer the question below.