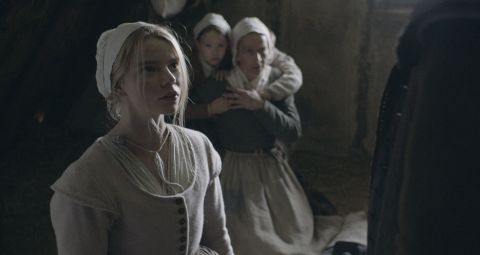 Robert Eggers’ measured, meticulous debut builds into one of the most genuinely scary horror movies of recent years.

The biggest threat in George Romero’s zombie movies isn’t the lurching, flesh-chomping hordes but the surviving humans’ inability to pull together; from discord and disharmony come death. Much the same can be said of Robert Eggers’ scrupulously chilling debut.

Subtitled ‘A New-England Folktale’ and gleaning some of its rough-hewn, period-poetic diction from journals written in the mid-17th century, The Witch, for all its genre know-how, would work almost as well if stripped of supernatural elements.

Yes, there are images of unnatural happenings so potent as to elicit audible gasps from the audience. But the fracturing of a family at the narrative’s poisoned heart can equally be attributed to the severity of patriarchal rule, fanatical religion and hardscrabble agrarian life.

The 1630s. Banished from a plantation for his proudly stubborn beliefs, a farmer, William (Ralph Ineson), takes his wife, Katherine (Katie Dickie), and five children to set up home on the edge of a wood. Here, in striking isolation, the atmosphere incrementally ratchets from disquietude to hysteria over 90 taut, unforgiving minutes. It begins when the youngest child, an infant named Samuel, inexplicably disappears while being safeguarded by his teenage sister, Thomasin (Anya Taylor-Joy).

The loss leads to guilt, prayers and recriminations, all intensified when the crop fails. Then Caleb (Harvey Scrimshaw), the second eldest after Thomasin, is found catatonic in the woods. The family is imploding, and it’s not long before young twins Mercy and Jonas (Ellie Grainger, Lucas Dawson) are taking their older sister at her taunting word and proclaiming her a witch. Worse, their mother and father are paying heed…

Eggers, a native of New England, unfailingly transports viewers to a forbidding time and place through the specificity of his costumes, sets and sound design, while DoP Jarin Blaschke’s austere images are painted in natural light – and, of course, darkness; the pale moon and flickering candles can rarely brighten the edges of the frame.

Such stylistic rigour is in opposition to the found-footage films that have dominated the horror genre this century. In place of smeared visuals delivered by churning cameras is a gallery of precisely framed pictures. Exteriors comprise misty greys and sepulchral greens; those candle-lit interiors possess an amber tint evocative of silent cinema.

In fact, the only bright spots in Eggers’ film are the flashes of red – a cloak during an especially heart-stopping sequence and sheets of blood that can’t be scrubbed from viewers’ eyeballs, such is the viciousness and veracity with which they’re unloosed.

The Witch is a slow film, a sincere film, accumulating atmosphere one shiver at a time. The wind whistles, the farmyard animals grunt and the birds caw; the score, all caterwauling cellos and choral chants, is the Devil’s orchestra – the sonic equivalent of a Hieronymus Bosch painting.

But after all the suggestion, shadows and shudders, Eggers is not afraid to show and tell, and demonstrates a neat knack for composing nightmare images. One involves a goat, another a raven: Satanic staples both but here treated in ways that are anything but hoary.

The climax, too, pours new blood from old bottles, and is scary enough to mute arguments that Eggers might have done better to not sacrifice ambiguity for full-throttle terror. (As John Carpenter said when asked about embracing show-stopping visuals with The Thing after the purist suspense of Halloween, when you’ve got something this good, you don’t hide it.)

The Witch is perhaps too slow and its dialogue too archly archaic for it to be this year’s crossover horror hit a la It Follows, but if you like the thought of The Exorcist taking place in Terrence Malick’s The New World, then this is for you. It certainly rewards patience, and all credit to Eggers and his cast for sticking to their beliefs.

The performances, like the direction, are unswerving in their conviction, and special mention should go to Anya Taylor-Joy as Thomasin. A real find, her pale face demands scrutiny – blank and expressive, guileless and cunning – just as her changing body mesmerises Caleb.

The Witch is, after all, a prologue to the Salem witch trials, so it is correct that an unhealthy fear of female sexuality should be stirred into the brew of religious fundamentalism and plain old cabin fever. It’s Eggers’ ability to keep the lid on all this bubbling hysteria until the very moment he wants it to blow sky-high that makes The Witch so effective.

Robert Eggers’ measured, meticulous debut builds into one of the most genuinely scary horror movies of recent years.