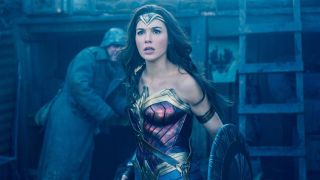 Rarely has a movie’s final showdown left me so torn as Wonder Woman’s. How can something be simultaneously perfect and terrible, impressively bold and yet predictable? It somehow both lifts and lets down what has come before. But before we go any further – in case the title didn’t give it away – let me stress that this is going to include FULL SPOILERS for Wonder Woman, and you probably shouldn’t read on unless you’ve seen the film.

The film is, all in all, pretty great. It does justice to Diana and the Amazons, it looks fantastic, it’s funny, the chemistry between Gal Gadot’s Diana Prince and Chris Pine’s Steve Trevor is subtle and grown-up, and director Patty Jenkins clearly understands the core of Wonder Woman’s character. And, best of all, the finale is when Jenkins really pulls it all together, and we see Diana become the icon we know from history in front of our very eyes.

Superhero movie endings are often fairly predictable. The villain is defeated and the heroes prevail, and generally, everything lives happily ever after (until the sequel). But that’s not the case in Wonder Woman. The film takes the bold step of killing off love interest Steve. No final last minute save, no magical fix – he simply dies saving innocents from Dr Poison’s deadly gas. His death is heroic and realistic and not the sort of thing you expect to see in a superhero film.

His death acts as the final piece clicking into place for Diana, turning her into Wonder Woman. She spends the whole film on a steep learning curve, realising that humanity is not perfect - in fact, it’s full of needless death, cruelty, bigotry, and selfishness. Just as she’s on the verge of becoming a cold-hearted warrior who has no regard for humanity – which Batman v Superman suggested she was – the film brilliantly takes her in the other direction. In her grief for Steve she makes the choice not to indulge in anger or revenge, but to see the best in humanity, to love them in spite of their flaws, and to dedicate herself to making the world a better place. At a time when so many superheroes are vowing vengeance (Batman, I’m looking at you) or breaking their moral code (like Superman in Man of Steel), it’s refreshing to see a character make a different choice.

Too often Wonder Woman is portrayed as just a warrior princess. It’s easier to do that than to try to encompass all of the character’s complexities. But the film embraces that complexity in its final moments and says yes, she’s a warrior - she will kill you if you’re a threat to the world - but she will also treat her enemies with the same love and compassion as she does all humanity. She spares Dr Poison in the hope that she can be redeemed, where other superheroes would have killed her, or let her die. Like the death of Steve, it’s a seriously brave move, especially in the unrelentingly dark world of the DCEU. Up until that point in the movie, Jenkins seemed like she had a good grasp of the character, but the ending proves she knows EXACTLY what Diana is about, and she and Gadot nailed it better than anyone could have hoped.

Which is why it’s such a shame that the rest of the final battle is almost a total disaster. The film plays its plot point cards needlessly close to its chest for far too long, which means that the finale is rushed. It’s clear early on that Diana herself is the god-killer, not the sword, and yet the film keeps that ‘secret’ until the last 15 minutes. It’s also obvious that Diana’s naive conviction that Danny Huston’s Ludendorff is Ares will prove to be false, which means that David Thewlis (pretty much the only other big name in the movie) will turn out to be Ares.

The movie opts to go for a ‘shock’ reveal just in time for the final battle, rather than giving Thewlis and Gadot time to build up any hero/villain chemistry. We were told Ares is the mortal enemy of Diana and the Amazons, and that’s supposed to be enough for us. Ludendorff, meanwhile, is dispatched with no explanation as to why Dr Poison was giving him a gas to “restore his strength”, or why he seems so furious when he tells Diana that she “knows nothing of the gods”. The film seemed to be hinting that he was more than just a German soldier, but it turns out it was all merely pointless misdirection after all.

We don’t even get to spend much time with Thewlis after he’s revealed to be Ares before he’s quickly hidden under CGI armour to turn him into a giant warrior. The idea of the modern god of war being a sly politician rather than doing the fighting himself is far more interesting than him just being a big monster swinging a sword, and it’s a shame the film ultimately goes down the more obvious route.

Ares isn’t the only character who suffers from too much CGI in the finale. Diana, too, is often replaced by a digital stand-in, and she saves the day thanks to the sudden introduction of a lightning power rather than using the skills that she spends the whole film honing. As a result, the climactic battle is far less engaging than the earlier Amazonian battle on the beach, or Diana liberating an entire Belgian town almost single-handed.

We’ve heard a lot over the years about how Wonder Woman is a ‘tricky’ character. Zack Snyder’s Diana Prince in BvS could easily have been no more than a tough warrior, the simplest (and least interesting) version of the character. But in the final minutes of Wonder Woman, Jenkins makes her so much more than that. It’s only a shame that the rest of the ending was such a spectacular cock-up.