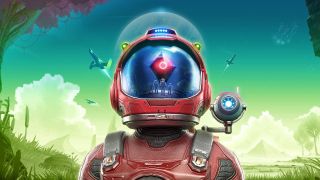 Hello Games might be hard at work on getting No Man's Sky Beyond out the door – the ambitious new expansion to No Man's Sky that's going to introduced an overhaul to the multiplayer systems and introduce full VR support to the game – but it's also beginning to look towards its future. The studio is working on a new game, something that studio co-founder Sean Murray told me earlier in the year would be "big, ambitious, and silly".

Aside from that comment, the new project has been shrouded in mystery. One thing is for certain, however – it won't be smaller or any less ambitious than No Man's Sky. It wasn't always that way. In fact, as Murray explained to me today in an interview that explored the studio's approach to balancing stress and ambition, he noted that Hello Games once toyed with creating a game that was far smaller than anything it has ever made before.

Beyond No Man's Sky

"Well, we've had literal conversations about what we are going to do next, and there has been some thought – there was definitely a conversation – of maybe we should do something really small," Murray told GamesRadar. "Something that would really surprise people… we've gone from making the biggest game ever, so what is the smallest, neatest thing that we can make?"

It's clear that Murray wanted to get back to basics with this new project – which is in the earliest of incubation and prototype stages as of writing – but he is honest with recognizing that "we could have focused on [doing] that, but we knew even from those early conversations that we would have found a way to make that a nightmare for ourselves."

That's a part of Hello Games' design process, and something we dug into deeper with Murray in the aforementioned interview. Still, it's acknowledgement that whatever does come from the studio after it's done with No Man's Sky will be no less ridiculous. The team is eager to do things that nobody else has done, that no other studio is daring to try. Will that work? Well, that's all a part of the fun of it. It's as Murray says, "let's go and make something really crazy and ambitious!"

Aren't ready to let No Man's Sky out of your life? Why not read our hands-on report with No Man's Sky Beyond, the VR game I have waited my entire life to play.