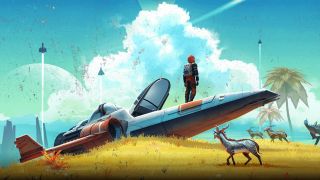 Hello Games is yet to officially reveal what it will be turning its attention to after it's done with No Man's Sky, but you better believe that it's going to be an even more ambitious undertaking than the procedural generation of an entire explorable universe. Like, more ambitious than anything the team has put out into the world so far. There's a good reason for that, and it isn't just that the studio's co-founder and creative director Sean Murray enjoys the stress and pressure of it all. It stems from the recognition that no matter what Hello Games does next is going to be hard – game development always is – so the studio might as well embrace it.

"We've got something else going on at the studio, and it's exciting, but it is – unfortunately – going to be ambitious," Murray said with a smirk, speaking at Develop: Brighton. "Basically, we had a little chat after No Man's Sky, and we decided that making games is really hard, like… it just is! It doesn't matter what type of game you make; you can speak to any developer, you'll meet them right at the start of development, and they will say that we are making this little physics puzzle game – a Tetris clone. Then you'll meet them three years later, and they'll have these massive beards right down to here," he continues, laughing as he acknowledges those photos that did the rounds ahead of No Man's Sky shipping, "and now the game has 300-player multiplayer. Developers just find a way to… well, fuck themselves, basically."

Honestly, No Man's Sky is the virtual reality game I have waited my entire life to play. No Man's Sky Beyond can't come soon enough.

Murray's take away from all of that – from the fiasco that arose in the months following the launch of No Man's Sky – wasn't that this is the time to find a way to reign in feature creep, wild ambition, and big ideas. No, Murray believes that his only path forward in this industry is to embrace the chaos, and hope that whatever it is that he and Hello Games releases not only resonates with players but can leave a good mark on the industry at large.

"Weirdly, my conclusion from that is let's go and make something really crazy and ambitious. It's going to be hard anyway, right?  Joe Danger was really hard; No Man's Sky was really hard…. They are actually comparable levels of hardness. But No Man's Sky had a real impact; it has hundreds of millions of hours played! So let's do that again; let's do crazy and silly things like that again – as long as it hasn't been done before, then that's interesting to me. And we're okay commercially, so let's go nuts. You'll meet me three years from now, and my beard will be back down to here!"

Following his wide-reaching keynote talk, hosted by our sister publication Edge Magazine and its editor Nathan Brown, GamesRadar sat down with Murray one-on-one to expand on some of the topics raised. One thing that has become apparent is that, while Hello Games is beginning to prototype its new game and hard at work on experimental puzzle game The Last Campfire, there's still plenty of life left in No Man's Sky.

Of course, Murray isn't eager to write out a road map – that's something he has steered well clear of throughout the post-launch support of the game – but he's committed to building out the game so long as the studio is still passionate about doing it. "I find this really interesting," Murray tells me, shifting in his seat as he looks for the right words. "I find that it's a bit of a taboo to say that game development sucks sometimes. Traditionally – and you must have experienced this – but a developer sits down with you, and the stock answer is: 'This is the game we always wanted to make. The team has never been happier, we're loving it'," he says, chuckling. "And it'll be for anything. It could be for the 16th bit of DLC, or whatever, and they will be like, 'oh yes, we've always wanted to add mechs to this game, and nothing makes us happier' that sort of thing."

"I have this moment where I ask but, how's it going?' and they always say, 'yeah, great actually! I'm doing really well, and I'm excited about this thing that's coming out'. And then you're like 'but how's it really going?' and they are like [puts his head into hands] 'it's fucking awful!"

The reason Murray brings this up, laughing as he does, his own experience developing games echoing throughout the anecdote, is that he doesn't want the small team at Hello Games to be stuck in a similar situation. He wants the team to dare to be ambitious because, as he tells it, "behind the scenes, it's actually really hard for everybody. It's been quite nice for me to step back and admit that, no, this is hard; it's always hard".

No developer sets out to make a bad game. That's a truth that translates across all creative endeavours, be it film, music, writing, theatre, or whatever it may be. It sometimes happens, of course, that's a reality of the human condition and the way that we can each parse entertainment or works of creative art. Still, Murray is attempting to combat creative fatigue at Hello Games by ensuring that the team is only experimenting, prototyping, and building content that excites the staff creating it. "There's a thing where people suggest features – and I can't go through them with you out loud because people would kill me – but they make complete sense to add on paper, and they might be easy for us to add, but we would never add them. The reason for that is that they would be a bit boring to implement."

"They would just be more of the same. Loads of games are doing that, and there's nothing wrong with that, but if you look at most games as a service games, they are just doing the next skin pack or whatever. We haven't really done that, and it's nice that we don't have to. It's nice that we can kind of have those conversations where we think… if we are all sat in a room [at Hello Games] and somebody isn't getting excited by what we're talking about, then we aren't going to do it. You can see it on their faces; they start yawning as they say, 'yeah, I guess we could do different variants of the helmet', and they just have this pained look in their eyes. So, no, we're definitely not doing that now."

If you're wondering why we haven't received a suite of cosmetic items in No Man's Sky, such as new skins for the pilots and ships, this is it. It's also why we have received the wild exploration expansion in No Man's Sky Next and are about to see multiplayer overhauled and the addition of VR support in this summer's No Man's Sky Beyond, all free of charge. Murray doesn't want this to change for Hello Games; he wants the studio to follow its passion. It won't work for every studio, he tells me, but this will help his deliver better content to the millions of players out there that are hungry to consume it.

Getting to this place hasn't been easy, for Murray or Hello Games. It's felt like a lifetime has passed since No Man's Sky launched in 2016 to a torrent of abuse and outcry, but the studio is in a good place now. It got its head down, and it got to work on the plan – on expanding No Man's Sky post-launch, expanding its horizons one update at a time.

"I've had this thing that I've gone through now. I've had my little midlife crisis or whatever, and I've asked myself whether I still want to do this – do I still want to make games? I do! So I started asking myself, but why do I? Can I even explain this to anyone?" He can, and he does. Murray tells me that, what keeps him going – what keeps Hello Games going as a tight unit, even after it has been through hell and back again – is raw passion for making games, a desire to be creative and challenge himself.

"The way I explain it to myself is that I enjoy the craft of making games, and I enjoy the ups and downs, and I enjoy seeing something come out, even though it's hard – and it's partly because it's hard. So I know I'm going to do that to myself. You asked me earlier how that attitude is reflected across the team. Well, we've had literal conversations about what we are going to do next, and there has been some thought – there was definitely a conversation – of maybe we should do something really small. Something that would really surprise people… we've gone from making the biggest game ever, so what is the smallest, neatest thing that we can make?" Murray says, chuckling, trying his hardest not to give me even the slightest hint as to what ideas the team is currently experimenting on.

"We could have focused on that, but we knew even from those early conversations that we would have found a way to make that a nightmare for ourselves. We would be six years in and I would be desperately trying to explain to you that 'yes, it does look very small, but we've spent an awfully long time on this,'" he says, laughing once again. "We all make it harder for ourselves than it needs to be. We want our games to be better. We play something, and it doesn't match up with what was in our heads, and we have to get there somehow... Day to day, for me, for the team, we have just accepted that this is what we get out of bed for."