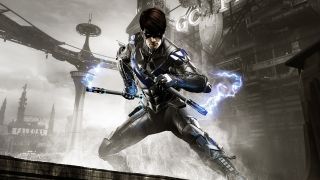 There are more rumours about the next instalment(s) in the Batman: Arkham universe than there are Riddler Trophies, with several DC projects apparently in the works at both Rocksteady and WB Montreal, but the latest "leak" – regardless of its validity – is sure to get people talking.

Supposed internal Warner Bros. marketing materials have surfaced on 4Chan, suggesting that the publisher is about to reveal its big new title on June 4 this year, just before E3 2019 rolls around. According to this document (which, as it happens, is exactly how another WB game – Mortal Kombat 11 – was accurately leaked), the untitled game's reveal will feature a CG trailer focusing on iconic Batman foe R'as al Ghul alongside "all the other villains."

Batman: Arkham studio finally confirms one thing about its next game: "It's not Superman"

Ghul, says the report, is "the exclusive timed raid mission that will be available to pre-order", but that's not all. Following on from this CG reveal, Warner Bros. apparently intends to release a "Gotham trailer", showing the metropolis as "one of the playable areas in game", and a "Star City trailer" debuting the "latest iteration of Arrow."

The document goes on to describe a game featuring online multiplayer, loot, team-focused gameplay, branching storylines, and a release date of early 2020. If that doesn't sound like a live-service Suicide Squad game in the style of Destiny 2, I don't know what does, and early fan speculation seems to agree.

Jason Schreier, a Kotaku reporter with a track record of leaking accurate information about upcoming games, chimed in on the subject when someone asked him about the veracity of this leak on Twitter. "I wouldn't want to spoil it", said Schreier, before signing off with a winking face emoji. Hmmm....

I guess we'll find out soon enough whether this supposed leak is real or not, as June 4 is not too far away at all. It'll be interesting to see how people take the idea of a live-service DC game, however, especially as excitement for the emerging genre is declining in the wake of Anthem and Fallout 76's dismal launches. If anyone can save us from live-service fatigue, surely it's Batman.

Discover more of the E3 2019 games that have been confirmed to make an appearance this year, or watch the video below for an extended look at the year in gaming ahead.