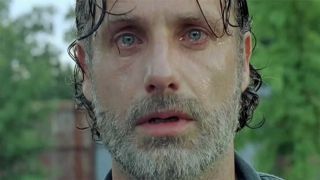 In news that has already sent shockwaves through The Walking Dead fandom, Robert Kirkman has announced that the hugely popular comic book series will come to an end... today (July 3)!

If you’re thinking that announcement has come out of nowhere, you’d be right. Kirkman, the series creator, only revealed the industry-shaking announcement yesterday (July 2) and, of course, attention has inevitably turned towards how it affects the future of the television franchise. AMC has assured fans that, although the comic series is saying farewell, the series will “live on” past The Walking Dead season 9.

While issue 193 of The Walking Dead comic (which hits newsstands and comic book apps today) is the last, AMC’s response (via The Wrap) serves as a tribute to Kirkman’s incredible work and serves as a hopeful look towards the series’ many upcoming projects.

“This extraordinary comic created a world that already lives in multiple forms, and in the hearts and minds of millions of fans around the world, and will for many years to come,” reads the statement.

There’s lots to get excited about, even if you were mostly a dyed-in-the-wool Walking Dead comic book fan. The Walking Dead season 10 is on the way, coming off the back of a stellar season that confounded us with its twists and turns, as is a trilogy of The Walking Dead movies starring Andrew Lincoln as Rick Grimes. There’s even a third The Walking Dead show in the works to run alongside current spin-off Fear the Walking Dead and the main series.

Fans of the undead series have reacted in their own inimitable way. Many are glad to see it end on its own terms, though some have a flesh-peeling bone to pick with the sudden nature of the announcement.

Wait The Walking dead is ending just like that? pic.twitter.com/edQjN5QHlDJuly 2, 2019

ROBERT KIRKMAN IS ENDING THE WALKING DEAD TOMORROW WHAT IS HAPPENINGJuly 2, 2019

Always pictured the Walking Dead comics ending at 200 but Kirkman ending the series unexpectedly is something I would expect from a comic series that does the unexpected and twists and turns. Better he end it on his terms rather than stretch it outJuly 3, 2019

The Walking Dead ending abruptly is pretty on brand with the shock deaths and anything-can-happen vibe that’s been the whole series. Pretty ballsy really.July 3, 2019

I don’t care that The Walking Dead is ending. I care that retailers found out about this at the same time as consumers. It pisses me off something fierce.July 2, 2019

AMC’s own statement, meanwhile, echoes the network’s previous sentiments. Namely, The Walking Dead is a property that it wants to hang around for decades. We could very well be looking back at this, let’s face it, historic day for The Walking Dead fans as just the beginning of a brand-new chapter.

Here are some of the new TV shows coming your way this year.