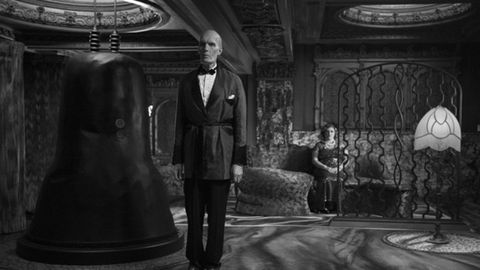 Lynch at his abstract, challenging best. A wonderful, surreal episode, but only if you play along.

In the latest episode of Twin Peaks, David Lynch seems to be channelling Eraserhead. This is a radical, recap-defying departure from the first 7 hours, and about as subversive and strange as TV gets. We’ll never know for sure what it all means, but it’s a hypnotic collage of images and sound that seems to fill in some of the backstory of Twin Peaks’ supernatural mythology, albeit in the opaque, indirect manner typical of Lynch. And whether you love this episode or hate it, the discussion it generates is going to be fascinating.

Cooper’s doppelgänger (Kyle MacLachlan) and Ray Monroe (George Griffith) drive along a dark country road, having recently blackmailed their way out of a South Dakota prison. Ray stops to take a leak and Cooper tries to shoot him in the back, only to discover that the gun left in the glovebox by Warden Murphy is a dud. Ray pulls his own piece and shoots Coop’s evil twin twice in the chest, killing him. Or so it seems.

Ghostly figures emerge from the darkness, with the same ragged clothes and blackened skin of the man we saw lurking in the morgue last week. The eerie spirits surround Cooper, performing some kind of bizarre ritual, coating him in blood. Ray, understandably terrified, gets back in the car and speeds away, calling Philip Jeffries to say that something “may be the key to what this is all about.” Meanwhile, Cooper sits bolt upright, seemingly brought back to life by the apparitions.

One of these charcoal-skinned men is called the Woodsman in the credits, suggesting they may be the same entities seen briefly in Fire Walk With Me. Quite how they’re connected to the Black Lodge remains to be discovered, but their close relation to the evil that lurks there is clear. As the ghosts ‘operate’ on Cooper, a bulbous lump of flesh emerges from his stomach bearing the smiling face of BOB (Frank Silva), whose mad, twisted grin is still utterly terrifying.

At the Roadhouse, Nine Inch Nails perform She’s Gone Away (“We keep licking while the skin turns black/Cut along the length, but you can’t get the feeling back”) and Lost Highway fans will be glad to see Trent Reznor and David Lynch working together again. Reznor is joined on stage by longtime collaborator Atticus Ross, with whom he composed the Oscar-winning soundtrack for The Social Network, and How to Destroy Angels singer Mariqueen Maandig.

Then things get weird. We travel back in time to July 6, 1945 and witness the Trinity nuclear test: the first ever detonation of an atomic bomb, which took place in the New Mexico desert. It’s a striking shot, the camera crawling slowly towards the explosion as the mushroom cloud blooms. ‘Threnody to the Victims of Hiroshima’ by Polish composer Krzysztof Penderecki plays—a cacophony of shrieking, discordant strings—and then we plunge deep into the cloud, revealing a psychedelic landscape of fire and exploding atoms. It’s at this point I realised that this wasn’t going to be a typical episode of Twin Peaks.

We cut to a dilapidated convenience store (the same one BOB and MIKE lived above?) and see more Woodsmen scurrying around it, accompanied by billowing smoke and flashes of electricity. Then to a creature floating in a black void—the same eyeless figure from the glass box in the first episode—which vomits a string of slimy matter, from which another blob of flesh sporting BOB’s face appears. Did we just witness his birth? If so, Manhattan Project leader J. Robert Oppenheimer’s famous quotation of the Bhagavad Gita (“I am become death, destroyer of worlds”) takes on a sinister new meaning.

This extraordinary hour of television is what happens when David Lynch is given complete creative control of a project, and it’s wonderful. I admit being frustrated at first, eager to see more of Twin Peaks, more of Diane, and Cooper finally snapping out of his daze. But when I accepted that it was going to be 56 minutes of Lynch’s subconscious spilled over the screen, I enjoyed it a lot more. And while it may seem like an incoherent mess of images and ideas, I think what we’re actually seeing is an origin story for BOB. The idea that humans created him, or at least gave him the power to manifest in our world, through the invention of the atomic bomb is perfect.

We return to the immense purple ocean where Cooper found himself at the beginning of episode 3. The camera skims along the water towards a jagged rock sticking out of the crashing waves, then up to an imposing building perched on top of it. Inside, a woman called Señorita Dido (Joy Nash) and the character credited as ??????? (Carel Struycken) are in a peculiar monochrome theatre watching the Trinity test, and the birth of BOB, on a large screen. Then the mystery man, who I’ll refer to as the Giant from now on, floats into the air and releases a shimmering gold light from his mouth.

Dido stares up at the Giant and a ball of light floats towards her. She picks it up and inside we see the smiling face of Laura Palmer. The orb then ascends to the rafters of the theatre, where some vast machine sucks it up and spits it out onto an image of the Earth on the screen. I’ll need to watch this a few more times to even begin to decode what’s happening, but it seems we’ll be seeing more of Laura Palmer before this series is over. David Lynch loves Sheryl Lee, and I wouldn’t be surprised if he’s dreamed up some way to get her back in the series in some form other than a backwards-talking Lodge spirit.

Back in New Mexico, it’s now 1956. A boy walks a girl home. An egg hatches in the middle of the desert, revealing a disgusting creature that seems to be part insect, part amphibian. And a petrified couple driving along a highway are surrounded by Woodsmen, one of whom asks repeatedly in a scary, otherworldly voice “Got a light?” Later this Woodsman kills two people at a radio station and begins broadcasting a strange message: “This is the water and this is the well,” he repeats in that horrible, scratchy, unreal voice of his. “Drink full and descend. The horse is the white of the eyes and dark within.”

Anyone who hears this creepy poem on the radio, including a woman in a diner, a mechanic in a garage, and the girl the boy walked home, seems to be hypnotised by it and falls asleep. And as the girl sleeps, the creature that hatched from the egg crawls through her window and into her mouth. Roll credits, and cue thousands of pages of wild theories, absurd speculation, and a fair amount of disappointment on social media and Twin Peaks fan forums. This is sure to be the most divisive episode of the run so far. Some will think it’s masterful, others indulgent and meaningless. So like any David Lynch film, then.

Before this episode aired, several members of the cast and crew said it was going to be something special, and they weren’t kidding. But people seemed to think this meant the return of our beloved Cooper, or something equally predictable, which undoubtedly made this hour of surreal art even more jarring. The lesson here? Don’t try and second guess Lynch and Frost. Just sit back and go along for the ride.

Lynch at his abstract, challenging best. A wonderful, surreal episode, but only if you play along.