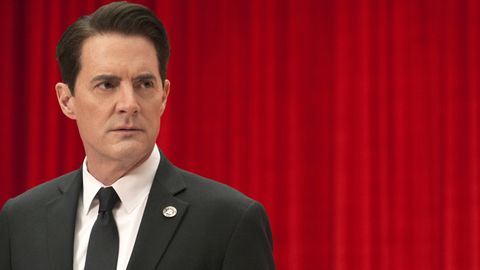 Terrifying, thrilling, and filled with intriguing mystery, this is a bold return for the cult series.

This is not the Coop we know and love. The charismatic, eccentric FBI agent who loves Tibet, coffee, and Douglas Firs. He has more in common with No Country for Old Men’s Anton Chigurh. A cruel, pitiless murderer who speaks in a slow, measured voice and maintains a blank expression. The people he meets seem to know he’s a man to be feared, although what exactly Cooper’s shadow self has been up to this past 25 years remains a mystery. This is, presumably, the result of the demon BOB possessing him in season 2’s shock cliffhanger.

It’s difficult to watch such a beloved character shoot a defenseless woman in the head using a pillow to muffle the gunshot, even if he is seemingly under the influence of an otherworldly evil. But this new Twin Peaks—which co-creators David Lynch and Mark Frost prefers we think of as an 18-part movie rather than a traditional episodic TV series—is a radical departure from what came before, feeling more like the sublime, subversive Twin Peaks: Fire Walk With Me. There’s no goofy slapstick humour, no cute cherry pie callbacks. It’s bleak, uncompromising, and laced with the rumbling sense of dread and unease that makes Lynch such a formidable filmmaker.

Angelo Badalamenti’s quirky, dreamy jazz soundtrack punctuated almost every scene in the original series, but the new show is surprisingly sparse—and not just musically. A low, droning ambience hums under the dialogue, and Lynch holds his shots for uncomfortably long periods of time. It’s quiet and careful—not paced like a TV show at all, interestingly—which gives you a constant feeling of nervous anticipation about what’s going to happen next. But the director also shows his mischievous side on occasion, particularly the hilariously roundabout, long-winded way in which two police officers access a locked apartment. He hasn’t lost any of his dark sense of humour.

In the Black Lodge, Cooper learns that the only way he can escape is if his double returns—something his alter ego is actively trying to avoid. The adoption of the Red Room as a pop culture image hasn’t dampened its impact at all, and it remains a hauntingly strange, unnerving place. Returning spirits include the benevolent giant (Carel Struycken), one-armed man MIKE (Al Strobel), and the Man From Another Place, now assuming the form of a blob of flesh resting atop a sycamore tree that’s crackling with electricity. He really wasn’t kidding when he said “when you see me again it won’t be me” in the season 2 finale.

We also see the return of Laura Palmer (Sheryl Lee)—or at least some representation of her conjured up by the Black Lodge—and her promised reunion with Cooper is a powerful moment. Let’s just hope he remembers what she whispered to him this time around. There are a lot of treats here for longtime fans, including a heartbreaking appearance by Margaret ‘The Log Lady’ Lanterman (Catherine E. Coulson), whose actor was gravely ill when filming her scenes, and the return of Deputy Hawk (Michael Horse), who finds himself drawn back into the darkness that plagued the town all those years ago.

But we don’t spend as much time in Twin Peaks across these first two hours as you might expect. The sleepy Washington town doesn’t get much screen time at all, and from the outset it’s clear that this is a story that will be taking place all across the USA—and maybe even beyond. We do visit the Great Northern briefly to check in with the brothers Horne, but we’ve yet to see the latest incarnation of the famous Double R diner. At first it’s jarring to see Twin Peaks drift away from the familiar forests, sawmills, and mist-shrouded mountains of the Pacific Northwest, but it has allowed the writers to tell a much bigger story.

In New York City a young man (Ben Rosenfield) has been hired to sit and stare at a mysterious glass box. A bank of cameras are constantly filming it, and he has to routinely switch out the SD cards when they fill up and store them in a vault. It’s unclear what he’s looking for or who hired him, but when a ghostly, abstract figure emerges from it and violently kills him—and the ‘good’ Cooper briefly appears in it as well—it seems his employer, for some reason, is trying to open, or has opened, a gateway to the Black Lodge. Someone continuing the work of antagonist Windom Earle, perhaps? Just two episodes in and the show is already filled with tantalising mysteries.

And in Buckhorn, South Dakota, school principal Bill Hastings (Matthew Lillard) has been arrested for a murder he has no memory of committing, despite the dead woman’s room being covered in his fingerprints. He does recall being there in a dream, however, the suggestion being that he, like Leland Palmer before him, is at the mercy of a murderous demon. The tone in these scenes is much more comical—albeit darkly so, with the idiosyncrasies expected of David Lynch—and the murder scene itself, in which the body and head belong to different people, is remarkably disgusting. We learn that Cooper’s double has a connection to these events, which raises yet more questions about what BOB has planned for his vessel.

Other questions we’re left with include what the hell Dr. Jacoby (Russ Tamblyn) is doing with all those shovels, why he traded his Hawaiian-themed house in for a trailer, and why the Log Lady told Hawk to find “what’s been lost”, which is apparently connected to “his heritage”. My money’s on the enigmatic Owl Cave ring, which The Secret History of Twin Peaks revealed was important to the Native Americans. It was last seen in a Fire Walk With Me deleted scene being taken from a comatose Annie by a light-fingered nurse, although it’s unclear whether this is canon or not. If the popular fan theory that the ring protects its wearer from being possessed by BOB is accurate, it could become an important item in this new series.

Although there are traces of the show we know and love—there’s something comforting about hearing the old theme playing over shots of the cascading Snoqualmie Falls, and the return of Andy Brennan (Harry Goaz) and Lucy Moran (Kimmy Robertson) provides a much-needed moment of warmth and humour—this Twin Peaks is a very different beast. The melodramatic soap opera is gone, replaced by a show that has a lot more in common with contemporary TV drama and Lynch’s cinematic experiments. But it’s still, underneath it all, identifiably Twin Peaks, and I’m glad they’ve chosen to do something different with it rather than simply retread old ground for the sake of easy nostalgia. It’s been a long wait, but it was worth it.

Terrifying, thrilling, and filled with intriguing mystery, this is a bold return for the cult series.