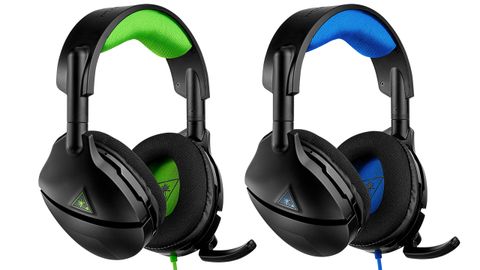 The Turtle Beach Stealth 300 is a great headset for under $100. Lightweight, comfortable, and durable, with a vibrant pop of colour that you can match to your console of choice; we'd recommend it if you're on a budget.

Comfort is just as important as performance when it comes to gaming headsets, and Turtle Beach aims to satisfy in both departments with its affordable Stealth 300 headset. It utilises the company’s ProSpecs Glasses Relief System to accommodate the bespectacled amongst us, with a partially padded, adjustable headband, and offers a handful of audio presets including a pretty beefed up bass option. You can even pick a colour to match your platform of choice, and keep your setup on-brand.

It’s a steal at only $80/ £70, but it does have its drawbacks, like the fact that it doesn’t have surround sound, and that it needs charging before you can plug and play, which can be a niggle for some users considering it’s wired, but there’s enough of a balance in its features to make the Stealth 300 an attractive option if you’re on a budget. If you want more, check out the best PC headsets for gaming, the best PS4 headset, Xbox One headset, and best Fortnite headsets options.

The Stealth 300 is off to a good start with a lightweight, matte black plastic frame that allows for hours of wear with no discomfort. But rest assured, it’s far from flimsy, with a metal-reinforced headband for extra durability. The rods for adjusting the fit of the band are housed in columns of plastic that connect the ear cups to the band, and protrude slightly from the silhouette, giving the impression of mini antenna.The effect is exacerbated by the padding at the top, raising the profile up and away from your head. It’s a small gripe, but considering how versatile it is in regards to functionality, it’s not the most sleek and stylish of designs, which is a shame because the swivel earcups make the Stealth 300 perfect to pack up and take on the go with you. For vanity’s sake alone, a low, form-fitting profile minus the antenna would make it perfect to wear outside.

The adjustable rods themselves are very stiff, to the point where you’ll half expect to be crowned the rightful king of England when you first wrestle them away from their resting position, and you won’t be able to tweak them into your preferred sweet spots very easily. But on the plus side, once you’ve fiddled about and got them to sit snugly onto your head, they won’t be moving again unless it’s by your own hand or divine intervention.

All of the headset’s controls are located on the left earcup, where you’ll find two large buttons - one for the power, and the other to cycle between modes - a volume wheel, and a mic monitor volume wheel. Compared to my go-to Sony Gold Wireless 2.0 headphones, the Stealth 300 headset is much easier to control by feel alone. The buttons and wheels are large and distinct from one another, and you won’t have to slip the headset off to figure out which button is which. You’ll also find the flip-up mic nestled here, which you can mute my flicking the boom arm up to sit flush against the earcup - a handy feature that means there’s no chance you’ll have accidentally left your mic on when you leave your squad for a pee break

The folks at Turtle Beach have also given you the option to show some brand-loyalty with Sony blue and Microsoft green colourways, adding pops of colour that you can use to fly the flag for your console of choice. Or you can just pick whichever colour tickles your fancy.

Memory foam sits inside the mesh fabric lining on the cups, and preference for which material is the nicest to have smooshed against your face for hours aside, the downside is that if you’re wearing make-up, or happen to be sweating profusely, the lining and foam is going to get pretty grubby, pretty quickly, which isn’t ideal.

The Stealth 300 is kitted out with battery-powered amps that need to be charged, but with 40-hours of use before they die, it’s not something that will put you out, as long you remember to plug them into your console or PC via the micro USB port using the cable provided to juice them back up again.

The headset comes with four preset audio profiles, that are denoted by a series of pips as you cycle through, letting you know which one you’ve selected. First up is Signature Sound, which is essentially nothing; this is what you’d hear with any headphones plugged in. Next is Bass Boost, which cranks up the bass, as you’d expect. The third mode is Bass and Treble Boost, which aims to give you a more “powerful” experience, and delivers richer (and louder) sounds. Lastly, there’s Treble/ Vocal Boost, which prioritises game dialogue and music vocals.

While surround sound is woefully absent, the Xbox version of the headset boasts support for Windows Sonic surround, which you’ll also find works with Windows 10, should you opt to use your headphones with a PC.

In addition to the memory foam, the earcups have been kitted out with Turtle Beach’s ProSpecs tech, which translates to the section of foam that sits against your temples being significantly softer and more pliable than the foam running along the rest of the cup. Having rolled out of bed and shunned the rigmarole of cleaning contact lenses in favour of popping on my milk-bottle top glasses for a lazy Saturday morning gaming session or two with the Stealth 300, I can attest to the fact that it really does work. The dual-foam earcups will accommodate your specs and you’ll barely remember you’re wearing them after a while.

If you’re worried that you’ll wind up shouting at your teammates down the mic when the bass is booming, with the over ear cups blocking out the hubbub of your surroundings, you’ll be as pleased as punch with the mic monitoring feature, which lets you hear your own voice via the speakers. You can control the volume of this independently to the main audio using the designated wheel.

The headset has a 3.5mm jack so you can use it with pretty much any device you like, and while the cable length is fairly generous for use with console when plugged into your controller, you may need to connect it to an extension cable when using it with a PC.

When it comes to performance, the Stealth 300’s sound profiles are what makes it shine for a gaming headset at an $80/£70 price point.

Bass Boost is great for action games and shooters, to lend a sense of epicness to the proceedings, and it’s perfect for listening to music, and watching movies and TV shows that call for some extra oomph.

Treble Boost brings ambient sounds to the forefront and is preferable for shooters if you want to hear footsteps and shots ringing out, giving you a slight edge when it comes to pinpointing enemy positioning.

For an overall richer sound that lets you enjoy higher and lower frequencies, the Bass and Treble Boost mode is where it’s at, and offers a nice balance with a fullness of sound that makes it perfectly suited to most forms of media.

The Turtle Beach Stealth 300 is a step up from a bare bones, basic headset, but offers features and performance that make it a must-buy if the top end of your budget is under $100/ £100. The lack of surround sound is the headset’s only real shortcoming, but the sound profiles and built-in amp won’t make you feel like you’re missing out.

The design isn’t something I’d be comfortable with wearing out in public; thanks to the antenna-like rod-housing, and single cushion raising it up from the top of the head, it screams gaming headset, but that’s a personal preference and you might feel just dandy wearing them on your daily commute, or out and about on your travels.

The ProSpecs tech is great, making it an even more attractive option for glasses wearers, but weather you have 20/20 vision or not, you’ll happily be able to wear the headset for hours without pinching or feeling any discomfort. And with 40-hours of use per charge, you won’t be running out of juice during prolonged gaming sessions.

All-in-all, the Turtle Beach Stealth 300 is a supremely comfortable pair of headphones that won’t break the bank, and offers enough of a range of EQ presets to enhance your music, movie, and TV consumption, as well as providing a little variety across video game genres to make up for the fact that you can’t programme your own sound profiles, or change them by game, like Sony’s own Gold headset and the accompanying app. While it may not meet the mark for the audiophiles amongst you, they’ll do just fine and then some for the rest of us.

You can find some worthy competitors for around the same price, like the SteelSeries Arctis 3, although it doesn’t have a USB port, and is rather convoluted when it comes to audio profiles. Overall though, if you're looking for a console headset that won't blow your budget but offers a great range of features and that you can wear for hours, this is a great headset and it has our stamp of approval.

The Turtle Beach Stealth 300 is a great headset for under $100. Lightweight, comfortable, and durable, with a vibrant pop of colour that you can match to your console of choice; we'd recommend it if you're on a budget.