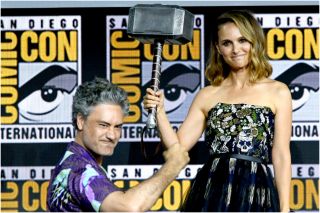 One of the biggest surprises to come out of this year’s San Diego Comic Con was the news that Natalie Portman’s Jane Foster will be returning to the Marvel Cinematic Universe, as part of the newly announced Marvel Phase 4. Not only that, though, but she’ll be wielding the enchanted hammer Mjolnir in Thor: Love and Thunder, the fourth film in the Chris Hemsworth fronted-series, following 2017’s Thor: Ragnarok.

However, while that news may have stunned cinema-goers (Portman has not reprised her role in the MCU since Thor: The Dark World), fans of the comics were a little more prepared. Jane, after all, took on the title of Thor, Goddess of Thunder, for several years, specifically as part of Jason Aaron and Russell Dauterman’s Mighty Thor series, which lasted from 2015-2018.

Taking on the Thor name was a big step up for the character, who had previously been either love interest, ground support, or occasional damsel in distress. Created by Stan Lee, Larry Lieber, and Jack Kirby – and originally named Jane Nelson – she first made her appearance in Journey into Mystery #84, published in 1962. Jane was a nurse (later becoming a doctor) who worked alongside Dr Donald Blake, who was actually Thor in disguise. And while the Marvel films switched up her career, making her an astrophysicist, they did little else to expand on her character. A romance was dutifully established in the first Thor, while in the second she was used as a plot device, becoming a vessel for the Aether (otherwise known as the Reality Stone). Jane was out of the picture for Thor’s outings with the Avengers and, by the time Ragnarok arrived, it was unceremoniously announced that the her romance with Thor had ended.

Thor: Love and Thunder, then, offers an opportunity not only to do right by the MCU’s Jane Foster, but by Portman herself. The Academy Award-winner reportedly left the franchise on negative terms as she had pushed for Patty Jenkins to direct Thor: The Dark World (Jenkins left following "creative differences" with Marvel and was eventually replaced by Alan Taylor). But how exactly will Jane Foster end up wielding Mjolnir? And what direction will Thor 4 take, in light of all that’s happened in Avengers: Infinity War and Avengers: Endgame? Ragnarok’s Taika Waititi, who returns here to direct, told Comic Con audiences that the film will directly borrow from Aaron and Dauterman’s The Mighty Thor series, which thankfully gives us a few hints. Here are our best guesses for what exactly that might mean – you can let us know how you think Thor: Love and Thunder will play out down in the comments.

The story of how Jane became Thor in the comics actually starts with 2014’s Original Sin storyline. In it, Nick Fury, who had absorbed the omnipotent powers of the Watchers, whispered a devastating secret to Thor that made him lose the ability to lift Mjolnir. Now without the title of Thor and going only by the name Odinson, he fell into a deep depression. The powerful weapon instead called to Jane, who discovered that she was deemed worthy, and she took on the mantle of the Goddess of Thunder. Considering Ragnarok (and then Endgame) already explored ideas of Thor’s worthiness and saw him learn that, in fact, he didn’t need Mjolnir to be the God of Thunder, it seems unlikely Thor 4 will draw from this particular storyline. The last time we saw him, he’d left Earth and New Asgard to join the Guardians of the Galaxy, so it’s probably more likely he’ll actively reject the title of Thor, leaving it open for Jane to step up to the plate.

Where does Mjolnir come from?

Which, of course, begs the question as to how Jane could possibly have gotten her hands on Mjolnir, since it was destroyed by Hela in Ragnarok and since Steve Rogers returned the one used in Endgame to its rightful place in the timeline. It’s a tough one to figure out, but there are two possible options. Since it’s already been made clear that the Disney+ shows will have a direct impact on the films, it could be that Loki, in the planned series that follows the trickster’s various adventures through time after he escaped with Space Stone, will somehow manipulate the timeline enough that Mjolnir pops back up in the present. There’s also a chance that the events of Doctor Strange in the Multiverse of Madness, which is released several months before Love and Thunder, will open a portal that delivers either Mjolnir or even an alternate reality Jane with Mjolnir already in hand.

For the first seven issues of The Mighty Thor, the identity of the Goddess of Thunder was actually kept secret. And although Comic Con already ruined the surprise there, it’s possible that Odinson himself won’t know who’s wielding Mjolnir for much of the film. Imagine this: our hero is called back from his intergalactic adventures with a talking raccoon because somebody on Earth is kicking butt and taking names, all while proclaiming themselves to be the great Thor. It’s his job to figure out who the imposter is. The story would be a good fit for Waititi’s own style, since a lot of his comedy (from Hunt for the Wilderpeople to What We Do in the Shadows) deals with playful rivalries and wounded masculinity. In the comics, Thor ultimately accepts Mjolnir’s new owner and gives Jane his blessing. The same could happen in the film, with the pair even potentially joining forces.

A crucial part of Aaron and Dauterman’s series is the fact that, right before these events, Jane is diagnosed with breast cancer. In fact, one of the reasons Odinson doesn’t initially figure out Jane has taken on the mantle of Thor is because he assumes it’d be impossible for someone going through chemotherapy to become Thor. It’s a lesson in never underestimating people’s inner strength. As it turns out, although wielding Mjolnir gives her all the powers of Thor, it also purges all the toxins from the body, including those used in her treatment. As the cancer continues to spread, it reaches a point where Dr Strange warns her that, if she picks up Mjolnir one more time and transforms into Thor, she will die. It’s a storyline that Marvel could plausibly choose to follow, especially since the comics were praised not only for how they pushed Jane’s narrative forward but for the way they depicted the harsh realities of living with cancer.

The issue with picking a villain for Love and Thunder is that a lot of the adversaries Jane fights as Thor have already been dealt with in some way in the MCU. For example, she battles against the Dark Elf Malekith and has to deal with a vengeful Odin, who doesn’t believe she should be wielding Mjolnir – except the former was the main adversary in Thor: The Dark  World and the latter died in Thor: Ragnarok. She does also, at one point, come across several different incarnations of Loki, though Hiddleston’s character making such a permanent return after his Disney+ series may seem a little odd considering how final his death in Infinity War felt. A possible candidate is Mangog, since he’s the physical manifestation of the hatred of an entire race of beings slaughtered by Odin. Not only would it be a nice antithesis to the “Love” in the film’s title, but it would be a nice callback to the revelation in Ragnarok that Odin was once a ruthless conqueror.

Mangog is also crucial to one of the most critical plot-points in The Mighty Thor series, where Jane, knowing that one more transformation into Thor will kill her, realises that she’s the only one who’s powerful enough to stop the villainous creature from wiping out the Asgardians. She chooses to sacrifice herself, picking up Mjolnir and binding it to Mangog, before sending both hurtling into the sun. Jane kisses Odinson for the last time and dies in his arms. Although, in the comics, she’s fairly swiftly brought back to life, it’s possible Love and Thunder could keep Jane’s sacrifice final, allowing Portman a more dignified end to her MCU arc without tying her further to the franchise (she’s Natalie Portman, she’s busy!). That said, Waititi would need to be careful here not to make it look like Portman had just been brought back in order to be sacrificed for some greater good, especially considering how underserved her character has been until now, on top of the criticisms levied at Black Widow’s sacrifice in Endgame. It would be a tricky one to pull off, but if done well, it could be a powerful and emotional scene to watch.

As an added bonus, when Jane is brought back in the comics, she goes on to become a Valkyrie. Since we know Tessa Thompson’s Valkyrie is confirmed to return, there’s a potential to tie both her and Jane’s stories together. Consider the fact that, at Comic Con, Thompson said of her character: “As the new king [of Asgard], she needs to find her queen.” Could Jane be just the right woman for the job?

Beta Ray Bill – a horse-like alien who is found to be worthy to wield Mjolnir – is a character that’s long been rumoured to feature in the Thor series, having even made a cameo in Thor: Ragnarok as a statue head on Sakaar. In fact, Kevin Feige, the president of Marvel Studios, has explicitly stated that there were plans to give the caracter a cameo in Ragnarok, but that the idea was scrapped because “if you can’t do it justice, do it later”. So how could he make an appearance in Love and Thunder? Well, maybe that’s another job for Doctor Strange in the Multiverse of Madness, which could potentially see a whole crew of alternate universe Thors appear. Can we get a cameo from Throg AKA frog Thor, please?

Clarisse Loughrey is The Independent's film critic. She can be found tweeting at @ClarisseLou.