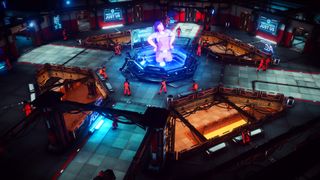 Paranoia: Happiness is Mandatory has disappeared from the Epic Games store without any explanation. The CRPG first launched as an exclusive on Epic Games store late last year after a delay moved it out of its original October slot, but now just a few months later, it’s like it was never there in the first place. Visiting the store page sticks you with only a 404 message and a picture of Fortnite’s Rex for some dead end flair.

Publisher Bigben and co-developers Cyanide and Black Shamrock have all said nothing on the subject, while the game’s Twitter account hasn’t tweeted in over a month, dating back to January 2. We reached out to a representative for the game who said he is “unable to comment on this event.” According to VG24/7, the Wayback Machine reveals the game remained on EGS until mid-January.

The dystopian role-playing game depicts a world where people are essentially force-fed happiness to keep them unaware of the painful reality surrounding them. It’s not unlike We Happy Few in that way, and in another way too: it was poorly received at launch. Paranoia has just a 47 critical score on Metacritic and a 48 on OpenCritic. Still, a high-40s score is not a game-erasing disaster. Plenty have survived worse to live another day in digital stores, so it doesn’t make sense to assume it was booed off of Epic’s stage.

In the absence of any explanation, though, we’re left wondering what the heck happened to it. The game is meant to arrive on Steam sometime this year, but again no one has clarified when that is scheduled to happen. That’s par for the EGS course anyway, as studios aren’t usually able to tell you when deals with Epic expire.

Unlike Paranoia, Metro Exodus is moving to Steam quite smoothly.