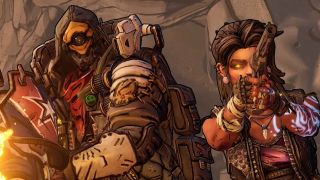 Ahead of the upcoming Borderlands 3 gameplay reveal, today Gearbox announced a nifty Twitch extension which will make watching the game more intuitive - and let you earn loot in the process.

The Borderlands 3 ECHOcast Twitch extension will let you inspect and explore the inventory, skill tree, and the profile of any Borderlands 3 streamer you watch (assuming they have the extension enabled on their stream; it's unclear how that'll be handled). According to the images Gearbox shared, you'll be able to dig through their guns and skills, complete with tooltips explaining what everything does. So, if you see a gun that you absolutely have to have or you're curious about the way other players have built their Vault Hunters, you'll be able to check them out for yourself without chucking a question into the ocean of voices that is Twitch chat.

This extension sounds like a Borderlands 3 take on Hearthstone's impressive Twitch overlay. It should save streamers a lot of redundant questions, and more importantly, it'll let viewers join in on the fun whenever a streamer cracks open a rare chest, starting as early as this Wednesday, May 1, during the aforementioned gameplay reveal.

"The ECHOcast Twitch extension affords you a chance to receive the same in-game loot that you watch a streamer finding in rare chests, which are typically guarded by powerful enemies," Gearbox explained. "Keep an eye out, because once the streamer opens a rare chest you have only 30 seconds to opt into the event. Note that the loot you receive will automatically scale to your level when you retrieve it from your in-game mailbox."

If you're one of the rare chest lotto winners - and you can bet plenty of people will be entering, especially in bigger streams - you'll be notified and then granted 30 seconds to choose which reward item you want. So, the process would look like this: a streamer opens a chest, you enter the rare chest event via ECHOcast, and if your name is drawn, you'll get to add one item from that chest to your own Vault Hunter's inventory - again, scaled to your level. Borderlands 3 is scheduled to release on September 13, so assuming we see several promo streams in the next few months, you could use this feature to build a sizeable starter kit on the road to launch.

Here's everything we learned from the Borderlands 3 trailer.