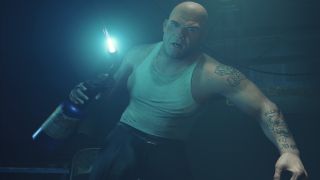 PlayStation VR's October 13 release date is coming up, and you'll need something to play once you get your shiny new headset out of the box. Enter PlayStation VR Worlds, a five-pack of varied virtual reality experiences perfect for trying out and/or showing off your new tech. Here are the highlights for each.

Not a crack shot? You'll still be able to play through London Heist's crime drama shooting gallery with an easy mode that puts laser sights on your pistols and makes enemy shots less damaging. That goes for both the campaign and the literal shooting gallery challenges, the latter of which will track your results with full online leaderboards.

We haven't seen nearly as much of Scavengers Odyssey as we have of London Heist, but it looks like it could be the most quietly compelling of the bunch. You'll play as an alien scavenger at the controls of a Spidercraft, which you can use to scale and leap between the walls of massive space wrecks as you search for black box recordings and other salvage.

Ocean Descent will let you take three different tours of the deep, ranging in intensity from gentle tour to TERRIFYING SHARK ENCOUNTER. Just make sure you pick the right one before you hand the headset to your thalassophobic friend.

Dangerball has at least three different modes for your neon-future-murder-pong pleasure: Score Attack, an endurance mode where you keep playing as long as you keep scoring; Quick Play, where you can compete against AI opponents with special abilities like swerve shots; and Tournament, where you can play through multiple rounds against said bots.

This one's pretty self explanatory, though most people who do street luge wait for traffic to clear. Not you! You can dodge oncoming trucks in time trials or the four-part VR Luge Tour, both of which have their own dedicated leaderboards.

PlayStation VR Worlds may be kind of a VR tech demo, but it's still a full-fledged PlayStation product: each game will have its own challenges and Trophies to earn, culminating in a Platinum Trophy for unlocking them all.