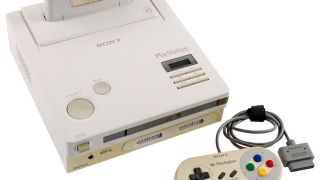 With the rate the auction is moving, this most likely isn’t over for Luckey.

Original story: The Nintendo Playstation, a console that was thought to be a myth, and a subject of video game lore is now available to buy via auction on Heritage Auctions.

Originally unveiled at the Consumer Electronics Show in 1991, the Nintendo PlayStation never received a release date. At the same event Nintendo backed out of its deal with Sony, and all 200 units of the console were said to be destroyed, but rumours began to surface about a potential sole survivor.

Back in 2015, the fabled game system came to light at an estate sale, and after five years of what we assume to be pure bliss, the previous buyer is ready to sell.

At the time of writing, the Nintendo Playstation is currently up to a whopping $31,000 and still has 22 days to go. It is said to be the only console of its kind, which would explain the hefty price tag.

The people over at Heritage Auctions have said that the console is functioning well, and that they’ve even played a few games of Mortal Kombat to test it. The console is now up for auction and bidding can be done in increments of $500. However, there is a 20% “buyers premium” attached, so bear that in mind if you’re considering bidding.

The description added to the item can be seen below.

"This prototype has been around the world and back again, admired and appreciated by video game enthusiasts from all over. Even though this is the closing of this portion of its narrative, it will continue to remain a pivotal piece of video game history no matter where it ends up."

When Sony Entertainment's CEO, Olaf Olafsson left to join Advanta Corporation, he took the Nintendo PlayStation with him. After Advanta filed for bankruptcy in 1999, they began gathering everything up in their corporate office to sell at auction. The Nintendo PlayStation prototype was grouped together with some miscellaneous items and boxed up ready for one lucky bidder.

One thing that isn’t covered in the description, is a list of games the console is compatible with. It can load standard Super Famicom cartridges, and also has a ‘data cartridge’ that communicates with the system in an effort to boot compatible CD ROMs. Unfortunately, it doesn’t play PlayStation games.

Although the only Nintendo Playstation is extremely expensive, these Nintendo Switch bundles for 2020 aren’t. Check out our list of Nintendo Switch accessories to go with that new Switch.