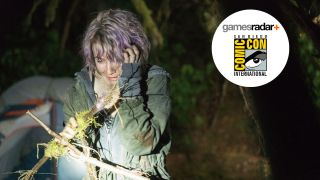 It wasn't until the audience seated for Adam Wingard's latest film, The Woods, were midway through the San Diego Comic Con premiere screening that they realised this isn't just another found footage horror. It's a sequel to THE found footage horror, now going by the title Blair Witch.

Let me just say that again: The Woods is a Blair Witch sequel, folks. Check out the new trailer, below:

Lionsgate's plan to keep the film a secret began in early 2013, and they maintained its fake identity to the last second. Crowds entering the screening saw posters and banners for The Woods, and re-emerged into the lobby to find they'd been switched out for Blair Witch materials. By that time, the cat had been let out of the bag.

Wingard's film is written by his long-time collaborator Simon Barrett, and picks up twenty years after the events of the first film. Ciao, Blair Witch 2: Book of Shadows. It stars James Allen McCune as the brother of Heather Donahue's character from the original. When he discovers the footage from her experience, and realises its connection to the Blair Witch legend, he gathers a group of friends and treks back into the Black Hills Forest. Naturally, things don't turn out particularly well for the group.

This trailer alone looks like the franchise is in safe hands. And by 'safe hands' I mean utterly terrifying hands that will ensure you never sleep again. Early reviews flooding out of Comic Con are heralding it as a return to the glory days of found footage, with the added punch of Wingard's signature chills and scares. I'm excited as hell to see how they add to the rich mythology started by Eduardo Sanchez and Daniel Myrick. What about you?