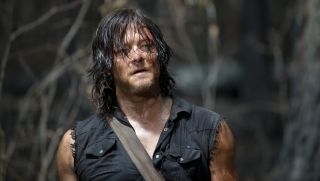 Even though fans of The Walking Dead are still (rightfully) smarting over the frustrating season 6 finale there's a good chance a big portion of them are going to be tuning in to season 7, if only to see who Negan decides to kill. There are many who believe that unfortunate character will be Norman Reedus' Daryl, and whether that's true or not the actor is confident fans will be satisfied with the show's forthcoming episodes:

“I think probably the planet is going to explode", Reedus told Entertainment Weekly. "That’s my feeling. It’s so good. Every time we go on a promotional tour talking about what’s going to come, we all say ‘Oh my God, it’s amazing. I can’t wait for you to see it.’ But it continually surprises me how this show grows and is put together and the execution of it – no pun intended. It blows my mind. It just continually reaches a new plateau every single time, and this is the highest plateau we’ve ever been. So just wait. It’s worth the wait, trust me".

Reedus also had a few things to say about that controversial finale; "I’ve been making art for a long time and you want people to talk. Sometimes you make something just to get people to talk. The fact that people are still talking is a huge compliment to how that episode was executed and the acting in it and the writing of it. That’s a good thing".

"Talk sometimes it’s good. I know we all have phones and everything is instant gratification now. I get it. I like that too. I like the controversy, to be honest. For that many people to be that invested in that show and freaking out, I think it’s great".

We've still got a while to wait before Daryl and the rest of the gang return to TV screens, which means fans still have plenty of time to speculate on who's getting the axe (or in this case, the bat). Here's hoping the answer proves worth the wait.