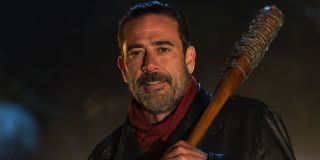 This article contains potential SPOILERS for The Walking Dead season 7

The Walking Dead's season 6 cliffhanger left the fate of a major character up in the air; just who was on the receiving end of Negan's baseball bat beating? Since that nail-biting episode aired, fans have attempted to use logic (analysing the order of shots) and reason (amplifying distorted audio) to figure out who was senselessly slain by Lucille, Negan's wire-wrapped bat. Another source that's proven reliable in the past is set photos, leading us to a potential reveal concerning the main surviving cast.

Once again: POTENTIAL SPOILERS ahead for The Walking Dead season 7!

A number of photos from the set have appeared online as the upcoming season is currently shooting, revealing a number of returning cast members. Using detective skills that Sherlock Holmes would call average at best, we have deduced the following: those characters didn't die. Check 'em out:

Okay, so no points for guessing correctly that Rick made it through Negan's trial-by-bludgeoning. Daryl's survival was a little less certain, though. The series' producers made it a point to emphasise that a MAJOR character would be Negan's victim, and with Daryl's tenure on the show stretching all the way back to season one, he was a prime candidate.

That leaves Michonne, Abraham, Sasha, Glenn, Maggie, Carl, Eugene, Rosita and Aaron unaccounted for in these snaps. As it's Glenn who perishes in the comics, there's a lot of folks convinced that actor Steven Yeun's busy schedule on two movies this summer points to him also dying in the show. If he's not on The Walking Dead set with his fellow actors, he must be dead right? Not so fast. Producer Greg Nicotero shot down that theory, telling IGN that the season 7 schedule "doesn't necessarily mean that we're shooting in order."

Let's not forget Hilltop either. Who's to say that the survivors managed to escape Negan and the Saviors and scarper up there for sanctuary? I'd say there's no way, but remember: this bunch survived the Governor and Terminus' cannibals. Oh, and thousands of walkers.