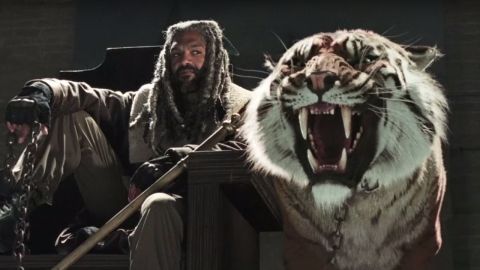 Allow us to put a pin in the Negan horror show for a while and rejoin Morgan and Carol, who, when last we saw them, were being rescued by gentlemen on horseback wearing what appeared to be makeshift armor. These fine fellows hailed from a settlement called The Kingdom, a convivial place ruled over by King Ezekiel, he of the impressive dreds and even more impressive pet tiger. It’s a really nice place to live, by all appearances - there’s cobbler at every meal! - but of course that peace and quiet comes at a price.

King Ezekiel is benevolent, but a little out there. “He… does his own thing,” says Morgan, which is certainly one way of putting it. He holds court in an auditorium, talks like he came right out of Camelot and then there’s that whole tiger thing. His subjects seem quite loyal to him, though, and for once in this post-apocalyptic shithole world, here’s someone in charge who isn’t terrifying or abusing people. So, ok, a little wackadoo, but it seems to be working, so it’s easy to see the appeal.

Carol, for her part, thinks the entire place is bonkers and wants to leave as soon as she’s able to walk. She does her best ‘I’m just a simple housewife’ act for the townsfolk while quietly stashing away weapons and supplies in readiness for her departure. Morgan pleads with her to stay, because he’s still trying to save her. He hasn’t yet quite figured out that not only does Carol not need saving, she doesn’t particularly want saving.

As Morgan chews on that frustration, King Ezekiel asks him to take part in a secret, but important, mission: rounding up pigs in a nearby town. It seems rather odd, keeping something like that secret from the people of The Kingdom, and even odder that the pigs are fed walkers before they’re slaughtered. “I want their bellies full of rot,” is the explanation Morgan is given, and it soon becomes clear why.

The hog carcasses aren’t for the people of The Kingdom, but rather a delivery for Negan’s Saviors. Tensions run high during the exchange, and it’s clear that King Ezekiel is trying to keep this arrangement as civilized as possible, not everyone is content to just hand food over to murderous bullies week after week. It’s probably a safe bet to assume that Rick and company will find a way to screw that up and get people killed before too long.

Ezekiel asks Morgan to train Benjamin who is pretty crap at fighting. No good with a gun, no good with a blade, so hey, maybe a staff is the way to go. As they spend time together, Benjamin reveals that he has read every book in town twice (including an HVAC repair manual), that his father was a good friend of Ezekiel’s before he died, and, most importantly, that The Kingdom’s arrangement with Negan is kept secret from the town because Ezekiel figures if they knew, they’d want to fight, and if they fought, they’d lose. So, like I said - Rick and his pals should be along any day to screw that right up.

Finally sufficiently healed up, Carol tries to slip away into the night, only to be confronted by Ezekiel, who comes clean with her. He’s not nuts, he’s just giving the people what they want: someone to follow. People feel safe when they have someone to follow, they’re calmer and more productive. So he went from being Ezekiel the ex-zookeeper (thus the tiger) to King Ezekiel of The Kingdom. He’s well aware of how goofy his shtick is, but it works, so he’s sticking with it. Carol isn’t ready to stick around, so they arrive at a compromise: she’ll move into a house nearby, so she’s gone… but not really gone. Ezekiel and Shiva stop by for a visit after she’s settled in, and it’s a relationship that will be very interesting to watch develop. Carol’s insistent that being alone is better, Ezekiel very much believes the opposite to be true, but they both appreciate that they can be totally honest with each other. Also, who doesn’t want a friend with a pet tiger?