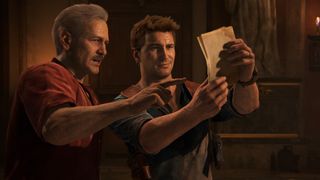 Mark Whalberg has been cast as Victor "Sully" Sullivan in the Tom Holland-led Uncharted movie, Variety reports. Sully plays an instrumental role in the Uncharted games as Drake's mentor and right-hand man, and the seasoned treasure-hunter will star alongside Holland in Sony's upcoming adaptation.

The Uncharted movie has seen a number of setbacks, including changing hands between numerous directors, since it was announced way back in 2009. Stranger Things director Shawn Levy was at the helm from 2016 until Dan Trachtenberg took over in May. Trachtenberg was replaced by Bumblebee director Travis Knight just last month.

Both Tom Holland and Mark Wahlberg appear noticeably younger than the characters they're set to portray. The subject of lead protagonist Nathan Drake's age throughout the series is one of ongoing debate, but it's safe to assume he was a fair bit older than the 23-year-old Tom Holland, even in the first game. Likewise, the grizzled Sully is in his late fifties in the first game, and Wahlberg a ripe 48. And indeed, the Uncharted film adaptation will follow the story of a slightly younger duo embarking on their very first adventure together. GamesRadar's own Connor Sheridan spoke with Trachtenberg about the younger cast before Travis Knight took over.

With a new director on board and a pair of high-profile actors set to portray leading roles, it seems the troubled Uncharted movie is finally on stable tracks. In June Sony revealed their adaptation is set to release just in time for the holidays on December 18, 2020.

In time for the holidays this year are the best Black Friday game deals to help you save money on 2019's biggest releases.